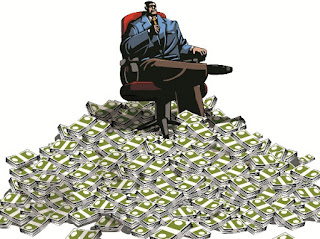 Amazon's Jeff Bezos has set a fresh record increasing his fortune by an additional $13bn (£10bn) in a single day to take his personal wealth to an unprecedented $189bn. The $13bn increase Bezos achieved on Monday is the biggest single-day jump in anyone’s net worth since Bloomberg began tracking the daily changes in fortunes of the world’s wealthiest people in 2012. In ONE DAY Jeff Bezos made well over 4,000 times what the average American earns in their ENTIRE LIFETIME. Bezos is now $71bn richer than the next-wealthiest person on the list: Microsoft founder Bill Gates.

Bezos’s fortune has been swelled by Amazon’s soaraway share price as hundreds of millions of people trapped at home by coronavirus lockdowns around the world turn to the online delivery giant to keep themselves fed and entertained. While many businesses have been hit hard by the pandemic and the beginnings of what threatens to be the worst economic crisis since the Great Depression of the 1930s, Amazon’s shares have increased by 70% since the start of the year. On Monday alone, the share price rose by 8% to a record $3,197. (By lunchtime Tuesday they were changing hands at slightly below that peak.)

Bezos’s $189bn fortune means he is personally worth more than companies such as Exxon Mobil, Nike or McDonald’s. His total wealth now makes him worth more than Britain’s biggest company, the pharmaceutical giant AstraZeneca which is valued on the stock exchange at £121bn. In the UK, Bezos has more than enough money to buy the big four banks – HSBC, Barclays, RBS and Lloyds – and have enough change left over to pick up British Airways owner IAG as well as Sainsbury’s and Marks & Spencer. The huge increase in Bezos’s wealth on Monday alone is equivalent of adding nearly 30 times the Queen’s £350m fortune. His fortune now dwarfs the GDP of Hungary, Ukraine and Qatar. And he is within striking distance of overtaking Greece and New Zealand who are ranked by the World Bank as the 51st and 52nd biggest economies in the world.

Oxfam, the global development charity, said it was “truly shocking” that Bezos had managed to make so much money during the coronavirus crisis, which has forced hundreds of millions of people around the world to rely on food banks and government support.
“It is hard to reconcile this obscene figure with the reality the rest of us are living through,” Rebecca Gowland, Oxfam’s head of inequality campaign and policy, said. “At a time when hardship is commonplace, hunger is on the increase and half a billion more people face being pushed into extreme poverty, it is truly shocking that one already extremely wealthy individual has pocketed another $74bn already this year.”
Gowland said it showed global economic policies are “not fit for purpose” and “allow the super-rich to accumulate vast amounts of money at the expense of the rest of us when that money is desperately needed for healthcare and social safety nets”.
Bezos has donated $100m to a food bank charity to help Americans struggling with the economic fallout from the pandemic. .  Bezos’s $100m donation represents 0.05% of his fortune. Bezos has given $2bn, amounting to just more than 1% of his wealth, to the Bezos Day One Fund to help address homelessness and improve education for children in low-income families. Amazon is also pumping $25m into an “Amazon Relief Fund” to support delivery drivers and “seasonal employees under financial distress.”
Bezos would have been even richer, if he had not been required to give his ex-wife MacKenzie 25% of his Amazon shares when they divorced last year. The boom in Amazon’s share price, increased her fortune by $4.6bn on Monday and she is now the world’s 13th-richest person.
https://www.theguardian.com/technology/2020/jul/21/jeff-bezos-the-worlds-richest-man-added-10bn-to-his-fortune-in-just-one-day

Posted by ajohnstone at 9:57 pm