We Are All One 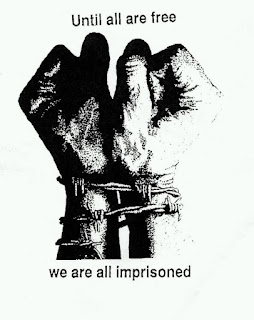 “Compare the thieves in our prisons with the big-businessmen of this country, who are in control of a system that is depriving millions of people of a decent life. These people — the men who run the government and the corporations — are much more dangerous than the guy who walks into a store with a pistol and robs somebody of a few dollars.” - Eldridge Cleaver.

Current events paint a somewhat frightening picture of politics in America. racism is not a local problem nor even a national issue but a social curse, rooted in widespread ignorance.  The phrase "law and order" dupes white workers into venting their discontent on black workers. George Floyd’s killing stems from the white community’s condoning of police violence meted out to African-Americans and other minorities.

There is something which the World Socialist Movement should make clear. The WSM sympathizes deeply with all of capitalism's victims. It is our outrage at being victimised, in most cases, that originally led us to become socialist. We recognises, too, that certain sections of the working class take more punishment than other sections, and at the present time our African-American fellow-worker generally suffers more than their white counterpart. Racism is one of the fouler fruits of workers' ignorance and frustration. African-Americans have suffered terribly under it. This is an obvious fact to anyone who has their eyes open. There is no doubt that America has a vast population of desperately poor and that the colour of a person’s skin often determines how desperate his or her poverty. Thus an African-American is much more likely to be unemployed, to have his children in their beds bitten by rats, than is a white person. These are the conditions the demonstrators re protesting against in addition to the police brutality they face and as far as that goes there can only be sympathy for them. It would be a sorry day if the poor in the ghettoes accepted their lot without protest.

Workers of all colours are united by a common economic interest under capitalism, to stand together against the ruling class. Nothing should be allowed to obscure working class unity nor to hamper its struggle to set up the new social order. We know enough of racism, and of what it does to human beings, to reject it as a destructive, anti-social force. There is a better way; we have a world to win and little time to lose

All workers should cooperate to get rid of capitalism, with its privileges and its denials and with the prejudices which help to divide the working class into so called races. From the earliest days of the history of working people, racial hatreds have repeatedly been an obstacle to working-class solidarity and organisation. Capitalists and their agents know the value of keeping alive these antagonisms. They know quite well that, whilst the workers remain divided racially their own privileged position in society will remain secure. Racial hatred have been of great service to the capitalist classes of America. In the United States, the idea is carefully nurtured among “white" workers that the “black" is the enemy, doing all in their power to rouse white against black so as to prevent them from joining forces. Hatred of African-Americans and belief in white supremacy are built into American culture, the legacy of slavery.


African-American protests are the result of frustration, having long since absorbed the few sops that capitalism can afford to give them, are running squarely into a sociological brick-wall—a wall they have termed the “white supremacy.” They have learned many lessons. They have learned, for example, that “integration” as such is an empty issue when the integrated population still remains without any basic economic control over their own lives. They have learned that white liberals can do almost nothing for them. And they have learned that the Federal Government is not their friend; in the last analysis, it can never be anything but their implacable enemy. The spectacle of thousands of police and National Guardsmen being called out to crush protests on the part of other Americans, finally and fully revealed what governments exist for: to maintain the power of the ruling class by force. And they can never, of their own free will, enact any reform that will interfere with this function.

It is possible that African-American resistance may also be a healthy sign in the American working class movement. The young insurrectionists of Minneapolis protesting George Floyd’s killing  do belong to the urban working class, and have broken with “their” government and openly defied it. Class consciousness takes a long time to develop. One of the signs of its development is a wholesale rejection on the part of workers that a treadmill is their only possible alternative in life. The #BlackLivesMatter suggest that large things are happening in America which the socialist need not regret. But so far they have focused on the symptoms rather the underlying disease. Sharing the blame are those Congressmen who champion ‘white supremacy’ and real estate, commercial, and financial interests which consider continued discrimination as a matter of good business.

The permanent and effective solution to  racism is to be found in a new society. Capitalism divides because the means of production are owned by a few. Socialism will embrace all mankind because the earth will be owned in common. Only thus can racism and all its ugly manifestations be finally conquered. That requires a more fundamental questioning of the politics and morals of capitalism than the protesters across America are presently prepared to undertake. As African-Americans begin to kick back, it is no time for them to lose their balance. The future seems grim, and the only thing that will brighten it will be the spread of socialist concepts. An end to all forms of slave relationships, including wage-slavery, is possible but not without unification of the working class for the express purpose of establishing world socialism, immediately. The black and white working class need to realise that they create the world's wealth and that their interests are in common irrespective of race and when the united black and white working class recognise this they can solve their problems by abolishing capitalism.

Posted by ajohnstone at 5:07 pm