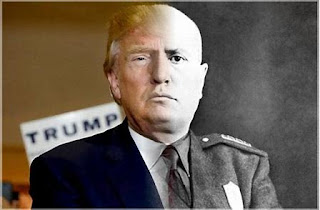 What is fascism? Or, more pertinently, what was fascism, since the ideology and movement of that name developed in the specific historical conditions of the period between the last century’s two world wars.
The word itself originated in Italy as the name given itself by an ultra-nationalist group opposed both to parliamentary democracy and to left-wing parties and which employed direct physical force on the streets as a deliberate tactic against its opponents. But it was not through street fighting that the fascisti came to power. They did so constitutionally when in 1922 the king, with the support of a section of the ruling class and its political representatives, appointed Mussolini prime minister. Once in control of political power, the fascisti were able to consolidate their rule with Mussolini as dictator by dissolving parliament and banning other parties.
In Germany, the similar ultra-nationalist, anti-democratic movement called itself the “National Socialist German Workers Party”, or Nazis, but was also conventionally called fascists at the time. They were able to gain considerable popular and electoral support (over one-third of voters) as a result of the failure of the democratic and reformist parties to solve the problems caused by capitalism, in particular, the mass unemployment in the slump that followed the Wall Street Crash of 1929. They too came to power constitutionally when the German President, with the approval of other politicians, appointed Hitler as Chancellor in 1933. From this position of control of state power, the Nazis were able to ban all other parties and the trade unions and install Hitler as dictator.
One thing that Italy and Germany had in common was that they were relatively recent unified states, in 1870 and 1871 respectively. As a result, feelings of national unity were not as strong as in longer-established states such as Britain and France. The more virulent nationalism there reflected the ruling class’s need for a stronger central state that could overcome the remaining regionalist loyalties.
In the case of Germany, its attempt in 1914 to get a place in the sun commensurate with its industrial and trading strength, an inevitability at the expense of Britain and France which had carved out substantial colonial empires for themselves, had failed. But the problem remained for their capitalist class and any second attempt was going to be more aggressive because more desperate.

Anti-fascism was the ideology under which Britain and France, aided later by the US, fought the Second World War to see off Germany’s second attempt to find a place in the sun at their expense (they succeeded but only to see the US take their place as the dominating world power). Somewhat ironically, it was also the ideology under which their ally, Russia, fought its war over which power – Germany or Russia – should dominate eastern Europe; ironically because, apart from the anti-semitism, the Russian dictatorship was the mirror-image of the German one (leader-worship, mass rallies, concentration camps, etc).
As a result there have been two kinds of anti-fascism, one in defence of political democracy, the other in defence of the Russian dictatorship. The situation has been confused by the fact that the latter hypocritically employed the language of the former. So some anti-fascists have not really been “anti-fascist” if this is defined as opposition to one-party dictatorships. But who isn’t opposed to these?
Who today wants to replace political democracy by a one-party or a one-man dictatorship? Not even far-right parties do. There are still some classical fascist groups around but their support is negligeable. All political parties with any degree of electoral support now favour governments being chosen through parliamentary and/or presidential elections.
It is an historical anachronism to describe today’s far-right parties which do have considerable support as fascist. Their ideas are still objectionable and dangerous, but they need to be opposed on some other basis than being fascist. On what basis, then, and how should they be opposed?

Far-right parties have grown in recent decades as a result of two things – their opposition to immigration into their countries and the failure of conservative, liberal and social-democratic parties to solve the problems ordinary people face.
As these problems are caused by the capitalist economic system’s imperative to put profit-making ahead of meeting people’s needs, governments formed by the conventional parties are doomed to fail and always do. The far-right parties have been able to exploit this to convince considerable numbers of people that the reason the other parties fail is because they are incompetent, self-seeking and corrupt, in much the same way as the classical fascists in the inter-world-war period were able to convince people that their problems were caused by democracy not capitalism.
The main reason, however, why these parties have attracted support is their opposition to immigration. They are xenophobic, racist, nationalist parties. That’s the basis on which they should be challenged. But how?

No Platform No Way

Basically, what’s involved is a battle of ideas. Such battles can only be fought with leaflets, pamphlets, books, meetings and, nowadays, websites, podcasts and social media. That’s the only way to change ideas, not by physically fighting with those who hold them nor by taking action, legal or extra-legal, to stop people expressing or promoting them.
That is why “no platforming” far-right organisations is not the way, and is even counter-productive. Stopping them holding meetings, breaking them up, and refusing to let others debate with them, are not going to change their ideas. In fact they are more likely to reinforce them. Physically confronting far-rightists, turning their demonstrations into street brawls or beating up their members is even less effective and, besides, reduces politics generally to the more primitive level of settling disagreements by fisticuffs rather than voting.
Of course in so far as there are fringe gangs and deranged individuals who physically attack immigrants, as happens from time to time, nobody is going to object to self-defence groups, but this is a different issue to combating the ideology of far-right parties, which don’t engage in such attacks.
So, no, the way to combat xenophobia and racism is not direct action to stop these views being expressed but to challenge and confront them as mistaken and dangerous, even in public debate with groups that advocate them. In fact refuting their mistaken and dangerous views in a public debate can be very effective.

What should be the content of the case against far-right ideas? This has to be more than just the general case that all humans are members of the same species with the same range of abilities and should be treated equally. This has to be an essential part of course but it is not enough on its own. Opposing these ideas cannot avoid bringing up the cause of the problems ordinary people face and which the far-right wrongly identifies and to which they offer a mistaken solution. Capitalism has to be mentioned and it has to be explained that the way-out is to establish a world of common ownership, democratic control, production to directly meet people’s needs and not for profit, and distribution of goods and services in accordance of the principle “from each according to their abilities, to each according to their needs.” In short, socialism properly understood.
The trouble is that most “anti-fascists”, even those calling themselves socialists (some are supporters of third-world dictatorships), are not anti-capitalism. They think that the problems ordinary people face can be solved within the profits-wages-money system that is capitalism. This is a serious weakness when it comes to making a case against the far-right since it rules out making the point that one reason for its rise in recent years is precisely the failure – impossibility in fact – of the conventional parties to solve these problems because they seek solutions within the framework of capitalism, so contributing to a situation which the far-right can benefit from. It goes without saying that of course the far-right can’t solve them either.
The other weakness is that most “anti-fascists” are nationalists, that is, they accept that the world is, and should be, divided into separate national groups entitled to inhabit a part of the globe and whose members share a common interest. Nations are in fact “imagined communities” whose members are divided into two antagonistic classes – the capitalists who own the means of production and who are the ruling class and the rest who work for them for wages. Nationalism is the ideology through which a national ruling class obtains and maintains the support and acquiescence of those they rule over. The “national interest” is their interest.
This is a misconception that “anti-fascists” share with the far-right. It means that nationalist “anti-fascists” are combating the ideas of the far-right on the far right’s territory, as when it comes to arguing whether or not immigration is in the “national interest”. Since the national interest is that of the capitalist class within each supposed nation in some cases the far-right is able to show that immigration controls and discrimination against “foreigners” are in the national capitalist interest,

Any campaign against the far-right views has to be waged on the level of ideas, not physical attacks or legal or extra-legal bans. It has to be based on recognising that capitalism is the cause of the problems such parties exploit to gain support and so a cause of their existence, and on a rejection of all nationalism of which xenophobia is just one end of the same spectrum. In short, the struggle against racist and xenophobic views should not be separated from the struggle for socialism properly understood as a world without frontiers. Adam Buick https://www.poliquads.com/post/anti-fascism-and-fascism