One World - One People - World Socialism 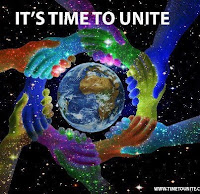 Dr Adam Rutherford, a geneticist says "Racism is being expressed in public more openly today than at any time I can recall, and it's our duty to contest it with facts."

MYTH 1: The DNA of white and black people is completely different


The primary pigment in human skin is melanin. It's used to protect us from the sun. It absorbs the sun's ultra violet rays before they can destroy folate, one of the body's key vitamins.
Many genes are involved in the biochemical pathways that result in melanin production. Natural variation within these genes is the root cause of the spectrum of skin tones that humans have.
So, the biggest genetic difference within the human race is between white people and black people, right? Wrong.
Firstly, all humans share almost all the same DNA - a fact that betrays all of our recent origins from Africa.
Secondly, there is more genetic diversity on the continent of Africa than in the rest of the world put together.
Two people from different tribes in Southern Africa will be more genetically different from each other than a Sri Lankan, a Māori and a Russian.
We might categorise people as white, black or brown, but these visual variations don't accurately reflect the genetic differences - or rather similarities - between us.

MYTH 2: There is such a thing as 'racial purity'

We think of certain areas, lands or peoples as being isolated - either physically or culturally - and these boundaries as being insurmountable.  But this is neither what history, nor genetics, tell us. In fact, no nation is static.
"People have moved around the world throughout history, and had sex whenever and wherever they could," says Dr Rutherford.
Sometimes these are big moves in short times.
More often, people are largely static over a few generations - and that can feel like a geographical and cultural anchor.
"Nevertheless, every Nazi has Jewish ancestors" says Dr Rutherford, "Every white supremacist has Middle Eastern ancestors. Every racist has African, Indian, East Asian ancestors, as well as everyone else."
"Racial purity is pure fantasy. For humans, there are no pure bloods. Only mongrels enriched by the blood of multitudes," he says.

MYTH 3: 'Germany for the Germans', 'Turkey for the Turks' (and other variations)

Some people experience a lot of angst about migrants and refugees coming to their country, a phenomenon that has been experienced in many places around the world of late.  Among recent examples, the shooting rampage last month that started in a shisha bar in Hanau, Germany, was motivated by a far-right doctrine to expel or murder immigrants.
Those on the far right have long expressed anger in the form of epithets: "Germany for the Germans", "France for the French", "Turkey for the Turks" and "Italy for Italians" have all been used as anti-immigration phrases by far-right groups.
"Go back to where you came from" is an offensive phrase that resonates all over the world.
In truth, countries like Germany, France, Turkey and Italy have had immigration throughout their history. In fact, just about everywhere has.
The British Isles, for instance, have become home to migrants since they separated from the continent around 7,500 years ago.
Before the French took over in 1066, that part of the world had been invaded by Vikings, Angles, Saxons, Huns, and dozens of other smaller tribes and clans.
And even before that, the Romans ruled, which in their turn came from all over the intercontinental empire, which reached as far as sub-Saharan Africa and the Middle East.
Earlier still, around 4,500 years ago Britain was populated primarily by farmers, who had migrated from Europe across what was continuous terrain between the Netherlands and East Anglia.
On the basis of DNA evidence, we think they may have been olive skinned, with dark hair and brown eyes.
And before them there were hunter-gatherers, who had even darker skin.
So, when political parties or even racists say: "France for the French", or "Italy for the Italians" and talk about "indigenous" people... who do they actually mean?

MYTH 4: A genealogy test can prove someone is 100% white

Genealogy and ancestry fascinate us - and racists in particular.
Websites like Stormfront are frequented by white nationalist, white supremacist, and anti-Semitic members who forward theories for Holocaust-denial and are obsessed with population genetics.
They use mainstream genealogy tests, like those offered by Ancestry DNA, to "prove" they are 100% white or non-Jewish.
However, the logic is flawed.
DNA can tell you some interesting things about family history - and it's very useful for identifying close family like lost siblings or biological parents - but its powers are profoundly limited by fundamental biology.
Over time, descendants start to shed the DNA of their actual ancestors, and the amount that vanishes builds up over the generations to be huge..
You carry DNA from only half of your ancestors dating eleven generations back. So it is possible that you are genetically unrelated to people you are actually descended from as recently as the 18th Century.
"You are descended from multitudes, from all around the world, from people you think you know and from more you know nothing about," says Dr Rutherford, "You will have no meaningful genetic link to many of them."

5. Black people are better at running than white people

The last white man to compete in a 100m final at the Olympics was in 1980. Since then, black athletes have dominated the modern era of sprinting. This has fuelled a commonly held belief that people of African descent have an advantage at the sport because of their genetic ancestry.
"Maybe there are probabilistic predictions one could make about ethnicity and sporting success based on genetics," says Dr Rutherford, "but they would be weak at best."
In actual fact, the genetics of sporting success are wickedly complex.
There are a myriad of factors in physiology of physicality, including the size of your heart, the efficiency with which you absorb oxygen, and muscular recovery, says Rutherford.
And these are relatively well understood phenomena which do have a genetic basis. But there are other physical traits (such as flexibility and co-ordination) which are less well understood.
On top of that, there's the psychological dimension: determination, concentration, and risk-taking, for example.
We do know that people who are good at explosive-energy sports tend to have a higher proportion of "fast-twitch" muscle cells, that process energy more quickly.
The genetics that underlie this involve a gene called ACTN3.
Studies have shown that elite athletes in power and strength sports are more likely to have copies of the R-type of ACTN3. The research indicates the gene occurs in a higher proportion of African Americans (96%) compared to white Americans (80%).
That does give a slight, population-wide advantage to African Americans to take place in explosive-energy sports - but it doesn't come anywhere close to explaining the difference between the number of African American sprinters and white competitors.
If it just came down to that gene, you might expect to see six black elite sprinters for every five white runners.
Adam says this is a simplistic analysis, but still a good example of how genetics don't align with racial stereotypes in sports.