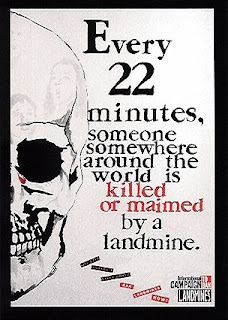 The Trump administration announced Friday that it was officially reversing a 2014 order by former President Barack Obama that constrained the  use of landmines to the Korean Peninsula and committed the U.S. to no further production of the mines. The Obama-era order put the U.S. further in line with the over 160 nations that have ratified the Mine Ban Treaty.

The White House says, "will authorize combatant commanders, in exceptional circumstances, to employ advanced, non-persistent landmines specifically designed to reduce unintended harm to civilians and partner forces." The statement added, "This action is yet another in a series of actions taken by the Trump administration to give our military the flexibility and capability it needs to win."

A Pentagon memo issued Friday says that the military "will take feasible precautions to protect civilians from the use of landmines." It also suggests the weapons can be used anywhere the U.S. military chooses. "Under this policy, the Department's ability to employ non-persistent landmines will not have any expressed geographic limitations. Appropriate geographic limitations will be formulated based on specific operational contexts and will be reflected in relevant rules of engagement, consistent with existing DoD policy and practice," the Pentagon memo states.


"The United States is doing a 180 on the near-global consensus to ban the abhorrent and inhumane use of landmines. These indiscriminate weapons maim and kill. They destroy families and communities, arable land, and livestock," said Michael Payne, interim advocacy director at Physicians for Human Rights, a group that helped launch the International Campaign to Ban Landmines. Payne, in his statement, rejected the assertion that "advanced" landmines would spare civilians harm. "Despite any purported technological advancements, landmines are still capable of causing indiscriminate harm and egregious injury and suffering," he said. "By loosening restrictions on landmine use, the United States is signaling to other countries around the world that landmines can be acceptable. The Trump administration should not normalize these archaic and gruesome weapons, which have no place in the 21st century.

Jeff Abramson, senior fellow with the Arms Control Association, similar rejected the notion of an "advanced" landmine.
"The world has rejected landmines because they are indiscriminate and disproportionately harm civilians, who make up the vast majority of landmine casualties. Technical solutions to make landmines self-destruct or otherwise labeled as 'smart' have failed to work as advertised and been rejected by the 164 counties, including all U.S. NATO allies, that have joined the Mine Ban Treaty," said Abramson.

"Most of the world's countries have embraced the ban on antipersonnel landmines for more than two decades, while the Trump administration has done a complete about-face in deciding to cling to these weapons in perpetuity," said Steve Goose, director of the arms division at Human Rights Watch. "Using landmines, which have claimed so many lives and limbs, is not justified by any country or group under any circumstances. Trump's new policy to use antipersonnel mines any time anywhere in the world is a retrograde action that should be condemned," Goose added. "All presidential candidates should endorse the goal of banning landmines."