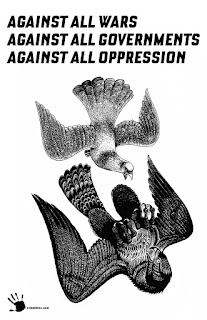 “Yours not to reason why; Yours but to do and die.”

Wars throughout history have been waged for conquest and plunder. The master class has always declared the wars; the subject class has always fought the battles. The master class has had all to gain and nothing to lose, while the subject class has had nothing to gain and all to lose—especially their lives. They have always taught and trained you to believe it to be your patriotic duty to go to war and to have yourselves slaughtered at their command. But in all the history of the world you, the people, have never had a voice in declaring war, and strange as it certainly appears, no war by any nation in any age has ever been declared by the people. it cannot be repeated too often—that the working class who fight all the battles, the working class who make the supreme sacrifices, the working class who freely shed their blood and furnish the corpses, have never yet had a voice in either declaring war or making peace. It is the ruling class that invariably does both. They alone declare war and they alone make peace.

If war is right let it be declared by the people. You who have your lives to lose, you certainly above all others have the right to decide the momentous issue of war or peace.

We offer solidarity and friendship to all the peoples of the world. What hope can we ever have of socialism, or even of the salvation of the human race, if we don’t resolutely oppose the endless wars which capitalism inflicts upon mankind? Under capitalism the chief causes of war are not religious or national differences but economic antagonisms, into which the exploiting classes of the various countries are driven by the system of production for profit. Just as this system sacrifices unceasingly the life and health of the working class on the battlefield of labour, so it has no scruple in shedding their blood in search of profit by protecting their existing markets or the opening up of new markets. Nation to-day is set against nation in the interests of the capitalist class. For the people, national and religious interests must disappear and the people must recognise what is for the common good of the people. The capitalist mode of production, with its war of all against all, its forcible oppression of the working class, is the real cause of war.

The working class alone have the serious desire, and they alone possess the power, to realise universal peace. In the name of those millions butchered in war; in the name of the mental and physical wrecks left to beg and starve on the streets of our villages and cities; in the name of the bereaved who mourn the vain sacrifice of their loved ones, we appeal to you to arouse yourselves before it is too late.

Fellow-workers, you have nothing to do with the quarrels of your rulers. Your task is to wage war against the capitalism, to end it and the industrial slavery that is grinding us down into ever increasing poverty.

Economic rivalries are extended from the home market to the world market. Economic rivalries on an international scale lead to economic wars, and economic wars lead to a clash of arms. This is a truth that cannot be denied. War is all about the re-division of the Earth. Capitalism is seeking to dominate the markets of the world. This cannot be done peaceful means. Capitalism breeds war. War is devastation. It destroys not only precious human lives, but large amounts of goods. It is an orgy of destruction. The brunt of a capitalist war, however, is borne by those who work. Wars are waged for the purpose of dominating other countries to be used as markets, sources of raw materials and investment grounds.

To quote scripture, Isaiah saw in prophetic vision a time when nations should war no more—when swords should be transformed into ploughshares and spears into pruning hooks. The fulfillment of the prophecy only awaits socialism and the solution of the economic problems we all face.