The enemy is capitalism 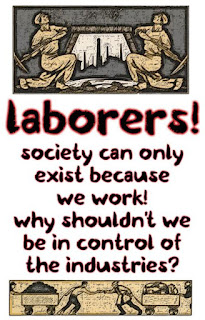 The goal of the socialist revolution is the abolition of capitalist private property, the abolition of all exploitation of man by man, the social ownership of the means of production and their planned use for the benefit of the whole of society, leading to abundance and solidarity. The Socialist Party does not put forward this goal as a utopia, as a mere vision of what would ideally satisfy people’s needs and make them all happy, but as a goal that is practical and attainable. Socialism means a future system of society characterised, as described by Marx, by the fact that capitalism, with its markets, commodities, values, prices, exchange, surplus value, capital, money, competition, etc., is no more; instead, there is a consciously planned society where production is for use and there will be plenty for all. The Socialist Party’s aim is to obtain for the whole community complete ownership and control of the means of transport, the means of manufacture, the mines, and the land. Thus we look to put an end for ever to the wage-system, to sweep away all distinctions of class, and eventually to establish world socialism. The Socialist Party looks for its success to the increasing and energetic promotion of our views among working people, and next to the capture and transformation of the State machine.

Members of the Socialist Party detests capitalism equally with our heads and with our hearts. We see in it an out-dated social system, an anomaly in our present world, holding back that wonderful development of technology and material resources that the present state of our knowledge could turn to the well-being of the people. We see in it a social system that carries within itself slumps and wars, poverty amidst plenty, oppression. All of us want to end it as soon as possible. We aim at replacing the present capitalist system by socialism, understood broadly as a system where there will be common ownership of the means of production and distribution. We envisage socialism as a society where material wealth will be in the hands of those who produce it, where the exploitation of man by man will be ended, where production will be used not for private profit, where a new relationship of fraternity will develop between peoples based on equality and independence, where individual men and women will find totally new possibilities to develop their capacities. We see both the need and the possibility to win the overwhelming majority of the population for the fight against capitalism and for socialism.

Our vocation is to gather together all the peoples of all countries, all those who want to work to change the economic system. Our means will be popular education and public propaganda, inspiring all workers to muster under its banner. That is what the Socialist Party is. Wherever the workers, organised in a class party, the party of revolution can penetrate parliaments it has the obligation to make that breach.