Global climate change is much bigger and incredibly complex and interconnected problem and therefore not comparable with anything preceding. It is not one issue or single problem but a multitude of interconnected issues. Can capitalism repair the planet? Can capitalism mitigate the effects of global warming? Can capitalism reverse climate change? The tiny capitalist controlling minority, the 1%, believe they can and if not plan to survive most if not all of the worst of the predicted catastrophes merely through their wealth – to own the land, to stockpile resources, to build bunkers if necessary and to ship to whatever part of the world remains the most pleasant. They have the resources to filter the polluted air and water. To cool or heat their residences as required.

It is the poor who will suffer. Therefore the Socialist Party has the most incentive to link our crusade for socialism with today’s countdown to climate breakdown. The working class as always, has the most to lose and the most to gain. This alone means it is an ideal time to spread our ideas, to update our literature and to really push to get our voices and ideas heard NOW. Millions of people are interested in and frightened by the climate crisis – plastics in the ocean, adulterated chemicalised foods, dirty air,  and loss of wildlife are on the agenda and the root cause of all those ills lies in the capitalist system we live under. We can sow the seeds of socialism on this fertile soil. Environment activists need the ideas we have, we exist solely to give it to them – lets do just that!


Capitalism is incapable structurally of resolving the climate crisis. It has economic imperatives that are incompatible with the solutions urgently required. Some nations have spurned the advice of their own scientists, not just Trump but Australia and Brasil. China is continuing expansion of coal power stations. India is dependent on coal and is unlikely to reduce its use. Coal is the most damaging of the fossil fuels because of the quantity of carbon dioxide it releases when it’s burned. For years, the increase in the number of Chinese coal-fired power stations has been criticised. Now environmental groups say China is also backing dozens of coal projects far beyond its borders.  Chinese-supported coal projects are underway or planned as far afield as South America, Africa, SE Asia, and the Balkans.


Gradualism is fundamentally incompatible with protecting civilization and the natural world. The many social ills of capitalism, even world war was not an existential threat until the invention of nuclear weapons but even with those, humans are still in charge (despite sci-fi scenarios of terminator computers). Not so with runaway climate change which is the point at which no remedial policy, even with socialism, is possible to stop it only to mitigate some of the effects.


Many socialists are always surprised by those who consider themselves the more progressive greenest of activists yet their understanding goes no further than accepting the concept of carrying capacity and that we need 2 or 3 planets because there are too many people on the world making too many demands upon resources. Despite their smugness about being vegan and compassion about wild-life, many demonstrate a deep misanthropy and reactionary social policies. They frequently say we must have population control to halt climate change…as if a Sudanese peasant has the same ecological footprint as an American corporation.
With such logic they come close to racist eugenic social engineering, that would promote euthanasia for the increasing elderly because we are living longer and infanticide because we have reduced the child mortality rates. Socialists argue that such ecology campaigners should be demanding, like ourselves, one world one people to address growing populations in the developing world to balance declining populations in the developed world with sensible and reasoned migration policies.
The use of fiscal policies, taxation and carbon pricing and subsidies is music to the ears of many in the capitalist class as an opportunity to make profits if they invest green. City of London will be rubbing their hands with glee at the prospect of packaging eco-capitalism. But the evidence shows that carbon trading was not having a significant effect on slowing down carbon emissions and global warming. 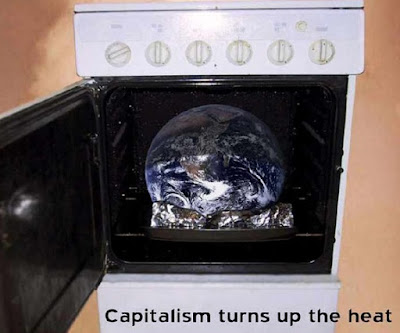