Our future is in our hands

A series of high temperature records were broken in the UK in 2019 as a consequence of the climate crisis, the Met Office has said.
The hottest temperature ever recorded in the UK was exceeded on 25 July in Cambridge, where the thermometer hit 38.7C (101F). The record for the hottest February day was also broken, with Kew Gardens in London recording 21.2C on the 26th.

The hottest December day is also likely to have been exceeded when 18.7C was recorded at Achfary in the Scottish Highlands on the 28th. The Highlands also recorded the highest minimum temperature ever recorded in February – of 13.9C at Achnagart.

Eight high temperature records were broken in the last decades, but only one for a low temperature. That was for the lowest maximum temperature for a March day, when Tredegar in Wales never got warmer than -4.7C on 1 March 2018 during the “beast from the east” weather event.

Globally, 2019 is expected to be the second or third hottest year since 1850. It was the hottest ever in Australia, where huge wildfires are burning. The global average temperature for the last decade is also expected to be the highest recorded.

A recent comprehensive expert analysis concluded that the world was on a path to climate disaster, with three-quarters of the commitments countries made under the 2015 Paris climate agreement rated as “totally inadequate”.

Our world has so many problems. It is difficult to look at 2020 with any sense of optimism. We are entering a new low point in the history of humankind. We face an unprecedented existential threat brought about by global warming. It is clear things must change. Climate change is no longer a scientific question but now a political and economic issue. The conditions of life on the planet are worsening dramatically. Two emotions are expressed by capitalists - greed and fear. The market has substituted mankind.

Socialists reconcile progress with humanity. We have the ability to think, to plan ahead. We can also cooperate and share. Part of the human condition is empathy.

We no longer know if the environmental destruction is reversible or not. However, with socialism, we can jettison the rules of the market so that we may have an opportunity to cope with the climate emergency, to minimise its damaging effects upon men, women and children. 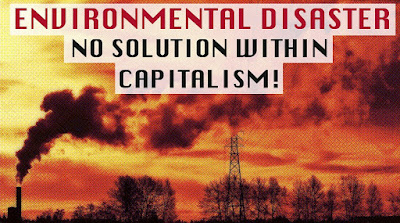