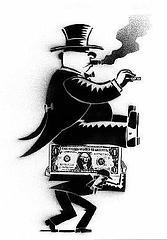 "I made a lot of bankers look very good," President Donald Trump boasted.

It was reported Thursday that the nation's six largest banks alone have received an estimated $32 billion windfall thanks to Republican tax cuts  after Bloomberg News reviewed the 2019 profits earnings of JPMorgan Chase, Bank of America, Citigroup, Wells Fargo, Goldman Sachs, and Morgan Stanley.

"The tax savings have spurred the banks to record profit," Bloomberg's Yalman Onaran reported. "The six firms posted $120 billion in net income for 2019, inching past 2018's mark. They had never surpassed $100 billion before the tax cuts."


Morris Pearl, chair of Patriotic Millionaires, which advocates for higher taxes on the wealthy and large corporations, said:


"The Trump administration touted that the average American was going to get $4,000 from their signature tax legislation. If you average six bank executives getting $32 billion while millions of people get $0, maybe that does average to $4000 per person. It's still reprehensible and fiscally irresponsible that just six banks got a $32 billion windfall while ordinary Americans are struggling."