Afghan War - Did you think it was over? 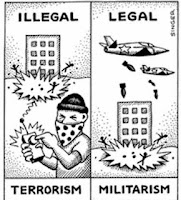 The US dropped more bombs on Afghanistan in 2019 than any other year since the Pentagon began keeping a tally.

According to new figures released by US central command, US warplanes dropped 7,423 bombs and other munitions on Afghanistan, a nearly eightfold increase from 2015.


According to UN data, the US accounted for half the 1,149 civilian deaths attributed to pro-government forces in Afghanistan over the first three-quarters of 2019.

US lies and deception spelled out in Afghanistan papers' shocking detail


The Taliban and other insurgent groups were responsible for 1,207 civilian deaths.
“This is the US military mistakenly thinking that they’re somehow going to change the political dynamics by dropping more ordnance on Afghanistan,” said Laurel Miller, former US acting special representative for Afghanistan and Pakistan, who is now director of the International Crisis Group’s Asia programme. “The argument that is made in favor what they’re doing is that this will somehow change the political dynamics and in a way that makes the Taliban more likely to come to favorable terms at the peace table, but I have no expectation that this is going to have that kind of effect. It also poses the considerable risk of of blowback in the sense that inevitably this increase in use of air power results in an increase in civilian casualties.”
“The US side is very explicitly hoping to use the ramped-up strikes to gain leverage in the ongoing talks with the Taliban,” said Frances Brown, who was director for democracy in Barack Obama’s national security council and is now a fellow at the Carnegie Endowment for International Peace. “The Taliban side is also using their own ramped-up violence to gain leverage; as a consequence, we saw record levels of overall violence in the third quarter of 2019, as both sides thought they were heading toward a preliminary agreement,” Brown said. “The problem here is that the Trump administration lacks the clear political negotiating strategy,” she added. “The US special envoy made some hard-fought progress over the course of 2019, only to have the rug yanked out from under him by the president, with no apparent rationale. The talks restarted a few weeks ago, but the US has now undermined its own hand.”