A Message to Greta

Despite her very obvious sincerity and good intentions, Greta Thunberg in her latest speech has once again demonstrated her political and economic naivety. Greta and 20 fellow youth activists have called upon world leaders to "abandon the fossil fuel economy."

In addressing the participant in the up-coming Davos Forum the climate activists stated, "We demand that at this year's forum, participants from all companies, banks, institutions, and governments immediately halt all investments in fossil fuel exploration and extraction, immediately end all fossil fuel subsidies, and immediately and completely divest from fossil fuels…We don't want these things done by 2050, 2030 or even 2021, we want this done now—as in right now."

They go on to say, “The world of finance has a responsibility to the planet, the people, and all other species living on it. In fact, it ought to be in every company and stakeholder's interest to make sure the planet they live on will thrive. But history has not shown the corporate world's willingness to hold themselves accountable. So it falls on us, the children, to do that. Anything less than immediately ceasing these investments in the fossil fuel industry would be a betrayal of life itself," the op-ed concludes. "Today's business as usual is turning into a crime against humanity. We demand that leaders play their part in putting an end to this madness. Our future is at stake, let that be their investment."

Our climate emergency is a much debated issue especially following Greta Thunberg’s media attention following her earlier brave and articulate speech accusing world leaders of not doing enough despite alarming inputs from climate scientists from all over the world. Many thousands articles, news feeds have been written or published on the climate issue.

The response of environmentalists is mixed. Many are alarmed but do not know exactly how urgent action is required. Some, though, are active participants of climate movements, especially the young generations irrespective of countries, color, race religions and ethnicities.

The political response to this crisis is mostly frustrating. Climate change possibly leading to a catastrophic point where civilisation itself is at risk and much of our fauna and flora is under threat of extinction has been on the agenda of scientists for years but nothing effective has been done by the ruling class or the representatives in the parliaments despite the alarms that global carbon emission has grown to danger levels. The much hyped climate conferences have practically achieved nothing.

This is to be expected, considering the present profit oriented economic system. The Socialist Party has not expect anything positive for obvious reasons. Much of the indifferent to this crisis is that, the mainstream media owned by the ruling class don’t want us to know the complicity of the investing class and CEOs. That is why the ruling class is reluctant to take any meaningful action. In fact why it’s not possible to take any meaningful action in the prevalent mode of production.

Our message is a simple one to convey – Capitalism is going to fail in controlling climate change and if not an existential to our species it will give pain and suffering and death to millions of our fellow humans and when that happens we don’t know what effect it will have politically or economically and it is justifiable to consider the likelihood of the breakdown of society on a global scale and describe it as the end of civilisation as we know it now.  Utopia or Dystopia? Socialism or Barbarism?

The biologist Garret Hardin wrote “Tragedy of the Commons”. Hardin’s basic thesis was seriously flawed. In practice, actually existing Commons do not generally result in serious environmental degradation since they are often quite closely monitored and subject to stringent rules to prevent overuse and destructive exploitation. More to the point, Hardin’s diagnosis of the problem was misplaced. It was not the fact that there was a commons to which the herders could gain free access that was the root cause of the problem of overgrazing. Rather it was the fact that the cattle herds were privately owned by herders in competition with each  other that locked them into the destructive logic whereby each herder benefited exclusively from the addition of one more head of cattle to his/her herd but where the environmental costs of each additional head of cattle were externalised and shared by all the commoners. This gave each individual herder a built-in incentive to add to his/her herd resulting in generalised overgrazing.

The same kind of logic applies in the case of tackling climate change. The trillions of dollars needed to tackle climate  may well be less than the costs of inaction but as a long as each capitalist state is seeking to externalise the costs of tackling climate change – get others to bear to more of the burden of these costs so as  not to impair its own economic prospects in its competition with others  – inaction will result. States will only be dragged kicking and screaming into action as things get generally worse and the action they take will probably be too little too late.

That is the tendency of capitalism – to get away with what is minimally required. It is why citing Hardin’s model (but correcting its faulty reasoning) might be a useful approach to encouraging environmentalists to taking more seriously what socialists have to say. Likening the capitalist states to Hardin’s private herd-owners is a good way of putting it

With science, production, distribution and the decision making process no longer shackled by the profit system there can only be positive outcomes in reference to climate adaptation.  Socialism is the only framework for tackling the problems and issues of climate change by outlining how this framework will take a proactive approach rather than waiting for market reaction. 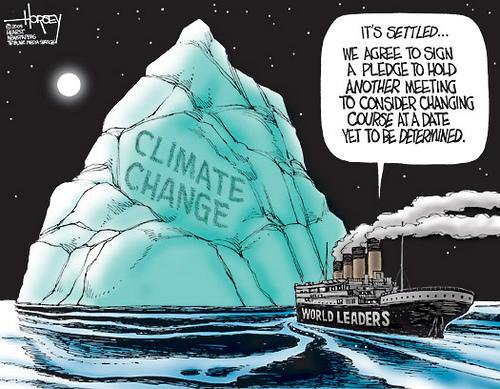