A comparison of the world's most developed countries has found that rising employment is masking an increased risk of living below the poverty line. Despite unemployment beginning to fall to pre-financial crisis levels in most EU and OECD countries, poverty is still on the rise, according to a new study by Germany's Bertelsmann Foundation.

After examining 41 of the world's most developed economies, the report found that poverty was either stagnating or increasing in 25 of them. Around the world, labour markets have recovered significantly in comparison with the post-2008 crisis years. About 10 years after the outbreak of the global financial crisis, the average unemployment rate across the 41 EU and OECD countries, at 5.3 percent, has for the first time fallen slightly below its pre-crisis level of 2008 (5.7 percent). However, the labour-market rally has as yet had no decisive impact on poverty prevention.

In Germany, for instance, from 2013 to 2018, employment rose by 3.3%, but the risk of falling below the poverty line exceeded that value at 4.3%, the foundation reported. The study defined poverty as less than half the average 'middle-class' income, meaning the poverty line in Germany is considered to be  €950 ($1,054) a month. This means that many people in Germany live below the poverty line despite having a job.
For example, the employment rate in Spain rose from around 55 percent in 2013 to 62 percent in 2018. Over the same period, the at-risk-of-poverty rate increased by five percentage points, to 14.6 percent. This finding shows that not all social groups benefit equally from the upward trend in the labor market. The share of people at risk of poverty is highest in Israel (17.9 percent) and the United States (17.8 percent).
Nordic countries once again hold the top positions with regard to social justice. It is here that opportunities for social participation for all people are strongest. At 10th place, Germany remains in the global top ten. The United States, by contrast, falls clearly into the ranks of the poorest performers, at 36th place.
https://www.bertelsmann-stiftung.de/en/topics/latest-news/2019/december/bleak-outlook-for-young-generations-in-oecd-countries/ 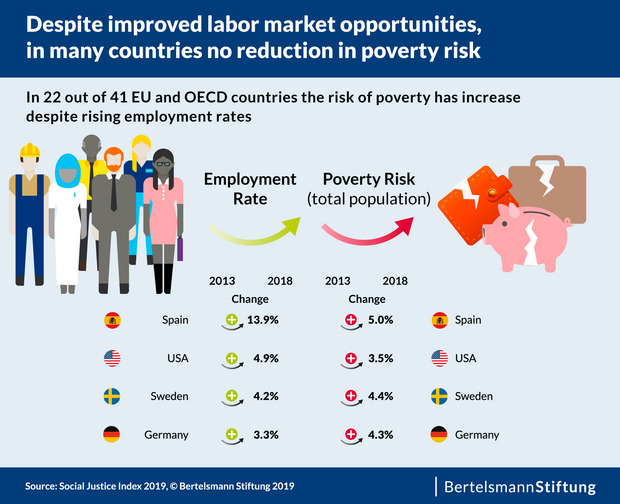