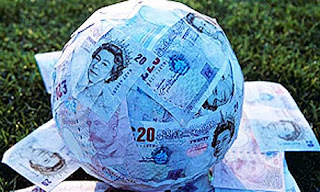 The average salary for a Premier League footballer has exceeded £3m a year for the first time, according to the latest Global Sports Salary Survey, which also highlights the financial muscle and worldwide popularity of English football’s top flight.


That makes Pep Guardiola’s squad the top earners in English football and the 13th-best-paid global sports team in the GSS survey, which tracks the pay of 10,070 players in 350 teams across eight major sports.


Barcelona have retained their status as the best-paid team in world sport. The average basic first-team pay at the La Liga champions is £9.83m per year for the 2019-20 season, much of which is down to Lionel Messi’s deal in 2018 that pays him more than £50m a season, including guaranteed image rights’ fees.
Real Madrid remain second (£8.9m) with Juventus (£8.08m) moving from ninth to third in this year’s survey, which includes only basic annual pay and not signing-on fees, loyalty bonuses or performance add-ons.

The report also notes average crowds in the Premier League in 2019-20 are on course to be the highest in top-flight English history, breaking the record set in the 1948-49 season. As the report’s editor, Nick Harris, points out: “In an age of football saturation, weariness at cynical owners, asset-squeezing, rampant agents’ greed and widely perceived sky-high ticket prices, record all-time crowds would be remarkable.”


The Premier League makes a large part of that £1.4bn from the Chinese digital broadcaster PPTV, which pays £185m a year, and the US channel NBC, which is spending £800m over six years for the rights.
The report points out that broadcasters in Thailand, Malaysia, Singapore, Hong Kong, Scandinavia, France, the Middle East, South America and sub-Saharan Africa are also each paying tens of millions of pounds per year for Premier League rights.
The Premier League is so successful at selling its product abroad that overseas rights contribute nearly 46% of the league’s annual broadcasting earnings of £3.1bn per year.
When measuring popularity on Facebook, Instagram and Twitter all the top 10 are football teams and five of those are Premier League teams.