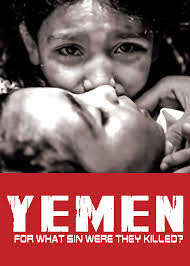 UK aid to  war-ravaged Yemen is dwarfed by arms sales to the Saudi-led coalition responsible for the devastation.

Britain has earned eight times more from arms sales to Saudi Arabia and other members of the coalition fighting in Yemen than it has spent on aid to help civilians caught up in the conflict.

Britain has given £770m in food, medicines and other assistance to civilians in Yemen over the past half decade, the report by Oxfam found, making the country the sixth largest recipient of British aid. But over the same period it has made £6.2bn of arms sales to members of the coalition fighting there, including Saudi Arabia and the United Arab Emirates.

“The UK government’s approach to Yemen is completely incoherent – on the one hand offering lifesaving aid to people devastated by the conflict, and on the other, helping to fuel that conflict by arming those involved,” said Danny Sriskandarajah, Oxfam chief executive.


Oxfam called on the government to halt arms sales indefinitely, and focus its efforts on halting the conflict and getting more donations for emergency relief. The UN fund for Yemen has received only a third of the funds needed; most vaccination programmes have already stopped as a result.


“What the UK has given in aid to hungry, homeless Yemenis is dwarfed by what it has gained in arms sales to Saudi Arabia and its coalition partners,” the report said. “The UK should be doing everything it can to end the war.”
“The Saudi-led coalition are paying only a fraction of the true price of these arms sales,” Sriskandarajah said. “The real cost is being borne by millions of Yemenis who have had to flee their homes, go without food and clean water, and endure outbreaks of disease.”