Inequality in the USA 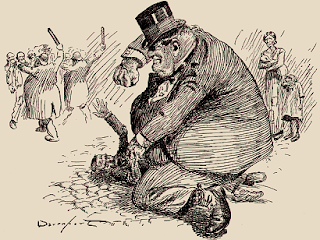 David Harrison at the Wall Street Journal reports that the lower 50% of US households by wealth have 32% less wealth than in 2003 in real numbers.

So they’ve gotten back to what they had in the way of assets (home value and other valuables; probably not stocks, since that half of Americans doesn’t typically own securities) in 2007, but not what they had in 2003.

Since the 1970s, union membership has plummeted from about one-quarter of all workers, to one-fifth in the 1980s, to one-tenth today.

Among private sector workers, union membership is now a dismal 6.4 percent. Big business’ assault on workers’ rights has had real consequences. Income inequality has widened, wages for working people have stagnated, the middle class has shrunk and American families are deeper in debt.

Corporate profits have been climbing, but the share going to workers has not. A new report by the Economic Policy Institute found that from 1978 to 2018, CEO compensation grew by 940 percent, while workers’ wages increased by just 12 percent.

More than 35 percent of non-elderly adults in families with at least one worker report difficulty paying for basic needs such as shelter, food, and medical care.  Even one-fifth of school teachers need a second job to make ends meet.

According to a report by the Federal Reserve, most American families don’t have enough savings to cover a $400 emergency. Most of the fast-growing jobs are in low-paying industries.