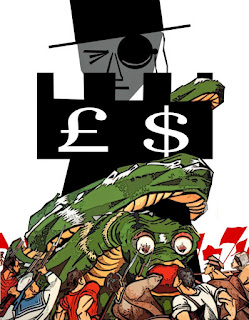 181 corporate CEOs who belong to the Business Roundtable signed a pledge saying they think corporations must demonstrate some reverence for other stakeholders as well: workers, customers, suppliers, communities and the environment rather than concentrating upon shareholders and CEOs.


Take, for example, these signers of the document: Amazon, General Motors, Duke Energy, Chevron and Honeywell. In 2018, they not only paid no taxes, they demanded taxpayers give them money.


Or take these signers: Pfizer, Johnson & Johnson, and McKesson. They all face lawsuits alleging they contributed to the opioid crisis that still kills 40 Americans every day.


Or how about signatory National Gypsum, one of four companies that agreed to pay $190 million to settle a price fixing case?
And there’s signer Duke Energy, which paid $102 million in fines and restitution after pleading guilty to polluting 70 miles of the Dan River.


Among the participants is General Motors, which benefited from the U.S. taxpayer bailout, and is now shutting down two American factories and plans to close three more in North America and lay off a total of 14,000 workers even as it expands production in Mexico. And there’s United Technologies, which depends on taxpayer dollars as a massive defense contractor, but which closed a plant in Indiana and partially closed another, Carrier, and sent the work to Mexico.


Also on the list of signatories is Bank of America, Citigroup, Morgan Stanley and JPMorgan Chase, all of which required bailout money from American taxpayers. JPMorgan Chase is led by Jamie Dimon, chairman of the Business Roundtable and evangelist for the corporate focus change.
Jamie Dimon could have led the way easily. He could, for example, end the bank’s exorbitant overdraft fees, which can rise to $102 a day. These fees, generally squeezed out of the bank’s poorest account holders, rake in $2 billion a year for JPMorgan Chase

Dimon could raise the wages of the bank’s workers, which seems a natural after U.S. Rep. Katie Porter grilled him
at a congressional hearing about a JPMorgan Chase worker paid so little that she runs a $567 deficit each month.


“I’m wholly sympathetic,” Dimon told Rep. Porter about the worker’s plight.
“She’s short $567, what would you suggest she do?” the lawmaker asked.
“I don’t know, I’d have to think about that,” Dimon said.
That was in April. The CEO who pulled down $31 million last year has had four months to think about it. How long does it take to figure out that tellers might be able to cover their bills if CEO pay had not grown 940 percent since 1978 while worker pay rose only a paltry 12 percent? How long does it take to figure out that the solution is for Dimon to slash his own pay and increase that of tellers?
On the very day that the Business Roundtable released the corporate pledge that featured Boeing CEO Dennis A. Muilenburg’s name, federal investigators determined there was sufficient merit to pursue nine unfair labor practice charges against the corporation.
But Boeing has fought its South Carolina workers’ attempts to unionize. A group of about 176 technicians in South Carolina voted last year to join the IAM, but Boeing is trying to overturn that election and now faces charges that it illegally fired five workers in retaliation for their support of the union.
If Muilenburg, whose compensation last year was $30 million, really believes Boeing’s workers are among the stakeholders to which the corporation has a “fundamental commitment,” he could have ended this dispute before the unfair labor practice charges were filed by rehiring the fired workers, recognizing the IAM and bargaining in good faith with the union.
Workers’ wages have been virtually flat for decades, while the rich continually got richer and richer. Young people are staggering under the burden of college debt and low-paid work, and they’ve told pollsters they want real change.
https://www.alternet.org/2019/08/the-business-elite-still-believe-the-greed-is-good-fallacy-but-this-dark-philosophy-has-brought-them-to-the-brink/
Posted by ajohnstone at 10:51 pm