A radical change in the food system is key to people's livelihoods and health worldwide. In its latest report the Intergovernmental Panel on Climate Change (IPCC), describes the vicious circle we face. Unhealthy soils and forests exacerbate climate change, while climate change, in turn, negatively impacts the forests and soils' health. The findings are the result of two years of work by 103 experts from 52 countries. Their report doesn't present a promising prospect: If global warming goes beyond 2 C what will likely happen is that fruitful land will turn to desert, infrastructure will crumble as permafrost thaws, and drought and extreme weather events will put the food system at risk. It's a grim picture. Crop yields are predicted to decrease due to climate change and food prices are expected to increase accordingly. Climate change could lower corn and soybean production in America by up to 80% in the next 60 years if emissions continue to rise. In southern India, for example, rice yields may decline by more than 14% over the next three decades.


The Socialist Party is aware of how very close capitalism has gone to making the planet uninhabitable for humans. We are well aware of how many people have already suffered and will suffer from the damage the profit system has done to our planet. We possibly have one more generation before it is too late. There won’t be any socialists, there can't be any socialism when nobody can breathe. Climate change is real and it’s as urgent as it gets that we make radical changes if we want a future on this planet. The Socialist Party takes no pleasure in raining on other people’s parades. We are, however, an organisation that has been around for a very long time and have seen many movements and campaigns come and go. It has given us an insight into why so many failed to achieve their aims. For that reason, we try to offer the benefit of our experience so that they do not repeat old mistakes nor try to re-invent the wheel. The Socialist Party advocates popular democracy. We want YOU [not ourselves] to be in charge and to be the change.

Reformists focus on the market for cures to all our social ills. Many among the campaigns to halt climate change favour technological fixes based on private property, for example, a transcontinental super-grid for long-distance energy exports from Sahara desert solar facilities. Divesting from polluting fossil-fuels to environmentally benign alternatives. Imposing green carbon taxes. Green advocates accept the market system as untouchable and look for salvation in changing the behaviour of individual consumers and adoption of energy-saving life-styles. Since capitalism is addicted to expansion, and devotes vast resources to this , there's no reason to expect reduced output and growth rates. The principle that "the polluter pays" will be a principle more honoured in the breach than the observance.

It is not a matter of merely getting Big Business out of politics and trusting in the benevolence of some government but of fundamentally transforming the nature of our system of production, of replacing capitalism and establishing a socialist society. Regardless of the how radical the reforms proposed, without doing away with the entire edifice of capitalism, means nothing changes - the state will continue to act in the interests of its pay-masters. Discontent around the world may indeed be manifesting itself, but they still stop short of demanding real change. The philosopher, Henry David Thoreau, said:
"There are a thousand hacking at the branches of evil to one who is striking at the root, and it may be that he who bestows the largest amount of time and money on the needy is doing the most by his mode of life to produce that misery which he strives in vain to relieve.”

Capitalism is simply unable to run on green lines, as its motive force is expansion and domination, with no thought for the consequences for the people or the environment. The Socialist Party argues that capitalism is unable to cope with the ecological challenges that lie ahead, from global warming to depletion of resources. The Socialist Party doesn’t need to go green to save the planet, environmental activists need to go red.

People are different in many ways but alike in so many others. We work hard. We depend on our pay to live, feel stressed out by too many hours or too few. We worry about our future, the future of our children and grandchildren. We are in college or in prison; retired or disabled. Young, old, unemployed, underemployed, always overworked. Computer technicians and nurses. Delivery drivers and engineers. Teachers and students. Designers and scientists. We are the working class. Without us, nothing could happen, nothing produced, nothing grown or harvested, nothing fixed or invented. Whether we live in cities or a rural setting; in an apartment or a house, we fret aboutjust making the rent or mortgage payment to avoid being homeless. We are always worried that we might lose all we've gained. As a class, as a community and as a people, we share the same basic needs and basic desires: to live in and be part of a healthy, peaceful and compassionate society. Unless we look towards the alternative, life is hopeless and meaningless. We've grown deeply disillusioned and pessimistic. The very existence of civilisation is now being threatened by thoughtless disregard for the future.

The Socialist Party is looking for real change and seeking a path to get it. We need to create ways to a more constructive and sustainable path. The point is, we can. Societies are man-made which means they can be 'undone'. They're not divine creations. The idea that change is painful or violent isn't true. But like birth, it isn't entirely pain-free either.

The more prepared we are to think about the future, the better; the more defined our goal, the better the outcome. History is on our side. Like our ancestors, we can envision a new way to live in harmony with nature and with others, for the benefit of the majority. We have been fooled into believing we are incapable of fundamental change. Without thinking, we believe the Big Lie. It’s obvious we need to reaffirm a real alternative based on the needs and wants of the people. We need to talk about socialism, all the time and everywhere. 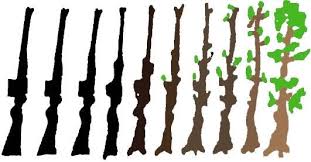