The Price of Travel 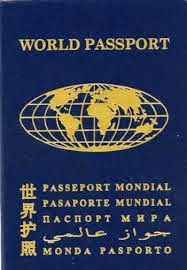 VFS Global has grown to become a $2.5bn (£2bn) company that is owned by a private equity fund. Investors include the Chinese and Abu Dhabi investment authorities, the Ohio Police and Fire Pension Fund, and yoghurt billionaire Theo Muller. Headquartered in Dubai with offices in 147 countries, VFS  processed more than 25 million visa applications last year alone. It has dealt with passport details and financial histories on behalf of the UK and 61 other governments. Obtaining financial accounts from Dubai is not possible, while the rest of the firm's corporate structure, which features entities in the Cayman Islands, Jersey and Luxembourg, is also complicated. An analysis of the Luxembourg accounts suggests that VFS’s shareholders have extracted £567m via dividends and writing off intercompany loans in the past two years.

Previously, the majority of UK visa applicants could submit their applications in British embassies or consulates, where their documents would be processed and decisions would be made. But the service was outsourced in 2014, and decision-making was concentrated in larger hubs run by VFS, which the Home Office said at the time would “improve the efficiency and consistency” of decision-making.

Fees have increased since then, with the cost of applying for a standard visit visa – the most popular type – rising by 14 per cent, from £83 in 2014 to £95 in 2019. Applications for settlement have increased from £885 to £1,523, a rise of 72 per cent. However, analysis of Home Office annual accounts shows that the department’s surplus from visa applications has increased at an even higher rate. The figure stood at £178.6m for the five years before 2014, but over the past five years, the department has made £1.6bn, and £438.1m last year alone – equating to £8.4m each week. Certain “premium services”, including premium lounges and priority visa services, some costing in excess of £1,500. Fees were also introduced for applicants wishing to make a query about their application, at £5.48 per query for the email service and £1.37 per minute for the phone helpline.

The Home Office has made £1.6bn from applicants looking to visit, study or be reunited with their families – a nine-fold increase on the five years prior to the start of the contract. The department makes on average per visa application has increased from £28.73 to £122.56. People applying through VFS – the majority of whom are from lower-income countries, with a quarter from south Asia. 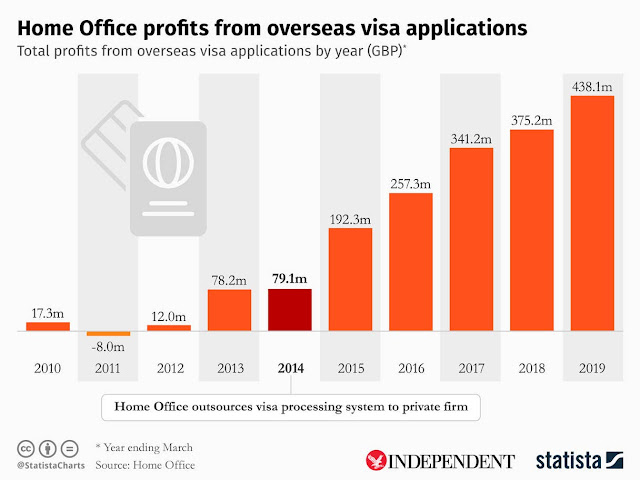 Another aspect not shown is the increased price ex-pats now pay for the out-sourcing renewal of passports. Fees have increased, physical visits to the office to deliver and receive passport, and rather than the passport's new date being from the time of expiry, it is now from the time of application, meaning it a 10-year passport means now 9 years and 6 month passport.