Stop the homeless from dying

A homeless person dies on average every 19 hours in the UK.

Figures from last year showed 449 deaths were recorded in 12 months – on average one every 20 hours – indicating that the frequency at which homeless people are dying has risen slightly, despite increased awareness of the issue.


Matthew Downie, director of policy and external affairs at Crisis, said it was disgraceful that hundreds of vulnerable people across the country had died without the dignity of a secure home.

“What makes this even worse is that a lot of these fatalities are happening not while people are rough sleeping, as you may expect, but when they are in temporary accommodation that is simply not fit for purpose. We know that homelessness can be ended across the UK, but only by the government tackling the root causes.”
Chris Wood, head of policy at Shelter, said: “Appalling levels of homelessness across the country should shame us all, but the fact that so many people die in such awful conditions – including teenagers and the elderly – is a national scandal.
“These deaths cannot be ignored and we demand urgent action from the new prime minister. The new government needs to increase housing benefit so it covers the true cost of renting, and tackle the root cause of the housing crisis by investing in 3 million more social homes over the next 20 years.”
Research by the University of Birmingham found that homeless people were being denied access to basic healthcare, with “perceived stigma and discrimination” in health settings causing “unnecessary deaths”.
The research found that homeless people were being denied registration at GP surgeries and discharged from hospital onto the streets with no referral to primary care providers.
The number of people sleeping on the streets has increased by 165 per cent in the past eight years.
https://www.independent.co.uk/news/uk/home-news/homeless-deaths-homelessness-housing-rough-sleeping-a9055671.html 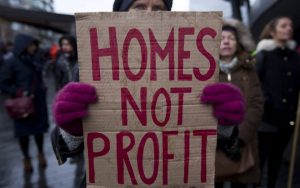 Posted by ajohnstone at 8:18 am