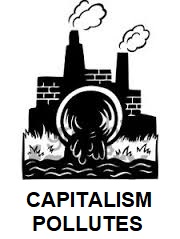 A few in the climate change campaign movements advocate a society based on cooperation and production for use, a sustainable society where production is in harmony with the environment and affairs are run in a decentralised and democratic manner. Like ourselves, they argue that only in such a system can ecological problems such as pollution and global warming be solved. Unless others embrace socialism, this vision is unachievable. Too many people environment protesters still believe there is no alternative to capitalism and so it will keep on existing and our mutula aspiration for a just ‘zero growth’ steady-state economy will remain unfulfilled.
If society is to be able to organise its production in an ecologically acceptable way, then it must abolish the capitalist economic mechanism of capital accumulation and gear production instead to the direct satisfaction of needs. The over-consumption of resources and the release of GHG emissions that nature can’t absorb is an inevitable result of capitalism’s very essence. The capitalist system creates vast amounts of waste in the military and many other socially useless jobs which are part of its profit-making machine. Endless growth and the growing consumption of materials is built into capitalism. To achieve a zero growth, sustainable society whilst retaining a market system is simply not possible for there exists an irresistible commercial pressure to increase sales for profit and if sales collapse, the economy breaks down into recession and financial crisis leading to unemployment and austerity cuts. Legislative measures in favour of the environment come up against the interests of enterprises and their shareholders because by increasing costs they decrease profits. Capitalist businesses take notice of the calamitous condition of the environment only when the damage has been done.
It is only after having placed the means of society’s existence under the control of the community that we will be able to at last ensure their management in the general interest of all and no longer for the benefit of their present owners. When land, resources and factories are owned communally and controlled democratically, there will be no them-and-us. We will then be capable of integrating ourselves into a stable eco-system on the basis of today's technology such as the renewable energies of wind, solar, tidal, geothermal etc. but, for the capitalists, these come at a “cost” which penalises them in face competition and in their relentless quest for profits. is possible. It is the capitalist economic system itself which is responsible for ecological problems.
Seen solely from a technical point of view there are many ways in which the damage caused to the environment could be eliminated or reduced. But before any of these can become real options to be implemented people themselves must first be liberated to freely make democratic decisions. What is required is political action - political action aimed at replacing this system by a new and different one. There can be no justification, on any grounds whatsoever, for wanting to retain an exploitative system which robs both the people and the planet and puts class privileges before the needs of the community. Capitalism governed by the overriding economic law of profits foremost, exhausts the soil of its fertility, plunders nature of its resources and destroys the natural systems on which all our lives depend.
To those eco-activists who are still to become receptive to the need for a radical transformation, we say a sustainable society can only be achieved within the context of a world in which all the Earth's resources, natural and industrial, have become the common heritage, under democratic control at local, regional and world level, of all humanity. In such a society production and distribution can be geared to satisfying human needs which, contrary to conventional wisdom, are not limitless and can be fully met without over-stretching nature’s resources.

I would suggest one addition [in brackets] to this sentence:

"Unless others embrace socialism, [or consensus anarchism,] this vision is unachievable."