No Place for Hate 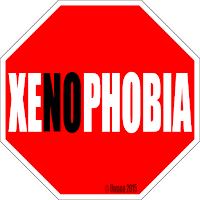 Eastern European pupils in schools in England and Scotland have experienced increased levels of racism and xenophobia since the Brexit vote, with some accusing their teachers of failing to protect them and even joining in, research led by the University of Strathclyde.
77% of pupils surveyed said they had suffered racism, xenophobia or bullying, though such approaches were often disguised as banter.
Of the pupils, 49% said the attacks had become more frequent since the EU referendum in 2016.
Pupils told researchers they were the target of verbal abuse in the street and on public transport. There were also physical attacks, but the children claimed most of the those happened at school. Some accused teachers of ignoring such incidents, and claimed a number even laughed along and joined in.
Daniela Sime, author of the report, who is presenting the paper at the European Sociological Association conference, said the attacks and the failure by some teachers to intervene were having an impact on pupils’ mental health and sense of belonging to the UK.
"The role of teachers, who were often said to be bystanders and did not intervene, or in some situations became perpetrators themselves, emerged as a profoundly important dimension of young people’s everyday experiences of marginalisation,” she said. “Teachers were, on occasions, not only discriminatory in their practices, by ignoring young people’s presence in class, but also racist in the views openly expressed during lessons or through ignoring incidents of racism they overheard.”  She continued, “Young people said that, in the vast majority of cases, they did not report incidents –because teachers knew and did not act to counter the culture of racism and xenophobia, or because of their belief that teachers would not be interested.”
https://www.theguardian.com/society/2019/aug/22/xenophobic-bullying-souring-lives-of-east-european-pupils-in-uk