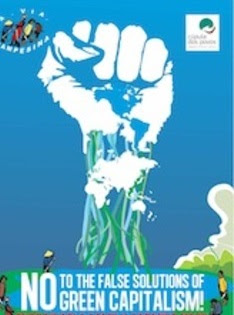 The SOYMB blog has previously exposed Evo Morales, the president of Bolivia, as a champion of corporate interests, hence his low profile in the US hit list of foreign leaders.

This article highlights that his ecology credentials are not as genuine as he claims them to be.

"...In a strongly worded statement, the Coordinator of Indigenous Organizations of the Amazon River Basin (COICA) declared both Evo Morales and Jair Bolsonaro “personas non gratas”: “We, indigenous peoples, hold the governments of Jair Bolsonaro and Evo Morales responsible for the disappearance and physical, environmental, and cultural genocide currently present in the Amazon.” Further, the statement condemns the policies of both governments, which “only aims to benefit the interests of powerful economic groups that seek to convert the Amazon into land plots for agricultural megaprojects, mines, dams, and energy projects.”..."

"...While international attention and ire has focused on the burning of the Brazilian Amazon and responsibility of the ultra-rightwing government of Jair Bolsonaro, across the border in eastern Bolivia, equally devastating wild fires in the past three weeks have destroyed nearly 1 million hectares. Response by the ideologically leftwing government of Evo Morales has been forced, instead, largely due to domestic pressure by Bolivians that increasingly view the response as not only as too little too late, but also directly blame Morales’ pro-development policies for ongoing destruction of the Amazon..."

"...Morales’ waited until Sunday morning, only hours before national protests were held in cities across the country, to announce that Bolivia would accept international aid, reversing his previous position...At a public rally Monday, Morales ridiculed the protests of environmentalists as the “electoral nuisance of small groups”..."

"...Indigenous leaders and civil society organizations point to government policies for encouraging deforestation and forest fires. In July, one month before the start of the forest fires, Evo Morales issued a presidential order (Supreme Decree 3973) further loosing restrictions for land clearing fires in the Bolivian Amazon from 5 to 20 hectares, modification to a 2015 law permitting land clearance. Pablo Solon, former Bolivian ambassador to the UN and director of the Foundation Solon, points out that deforestations rates have spiked in recent years, more than tripling this year from 295 thousand hectares in 2016, while 420 thousand hectares were lost last year. Under current regulations, the fine for illegal land clearing is as little as $6.60 per hectare, while the estimated cost for seeding the reforestation of one hectare is $1,000..."

"...Evo Morales has carefully cultivated his image on the world stage as an indigenous defender of the “Pachamama (Mother Earth)”, but his domestic policies belie another reality...In the same manner as Bolsonaro, Bolivia’s Vice-President Alvaro Garcia Linera accuses detractors of Amazonian development as engaging in paternalist “ecological imperialism”..."

"...Morales demonstrated where his interests lie by attending the annual meeting of the regional ranchers’ federation of Beni in the Amazonian city of Trinidad. At the meeting, federation president Abdon Nacif denounced calls to repeal the controversial Decree 3973, stating that prohibiting forest clearing would harm regional development. Earlier this year, the Morales announced alongside private business leaders in Santa Cruz the expansion of the agricultural frontier in the Bolivian Amazon by an additional 250 thousand hectares, largely destined for the cultivation of transgenic soya. Starting this month, Bolivia will export as much as 200 thousand tons of beef to China’s growing consumer market. Only last week Morales’ boasted that businessmen tell him they earn more now with his leftist party than during previous neoliberal governments..."

"...Evo Morales has defended land clearance permits by justifying the importance of using fires (chaqueos) for rural subsistence, “small families that don’t use chaqueo, what are they going to live on?”. However, members of indigenous communities see this condonation as an affront to their livelihood and methods of cultivation. “For us, this is something disastrous. We have planted mahogany, chestnut, many trees and are repopulating the forest. Now as consequence, everything we have worked to create is going to be stripped down and burned. Practically, this decree is sweeping away everything we have created”, said Lidia Anti from the Communal Organization of Amazonian Women of the Beni..."

"...According to the director of Foundation TIERRA, Gonzalo Colque, the fire zones in the Chiquitania directly correspond with expansion areas of the agricultural frontier and colonization. The government has accelerated land donations in the region, waving the requirements of regulatory process. Between 2011 and 2018, 7 million hectares have been titled in the region. According to official figures, the majority (57 percent) of new land titles in the Chiquitania have gone to medium and large property holders, while only 28 percent have benefited small property holders. “Those that have received land are not agricultural workers. They don’t live there, and many have deforested without management practices. This is dangerous. The beneficiaries are members of the ruling party who do not live from agriculture but instead have fattened up to later sell the land to industrial agriculture”, maintains Colque…"

"...Sunday’s rally for international aid in Santa Cruz transformed into an impressive and large protest as thousands flooded the city’s central plaza into the evening. Demands for the repeal of Decree 3973 were ubiquitous and chants for justice reverberated across the crowd. “Evo, Murderer!, Evo, Murderer!”..."
Posted by ajohnstone at 2:14 am