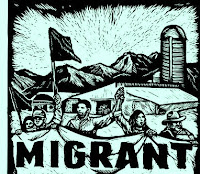 Climate change is causing more frequent and severe droughts, as well as torrential and erratic rains, leaving families with little choice but to migrate

Poor harvests and prolonged drought are driving rural families in parts of Central America from their homes to seek better opportunities in their own or neighboring countries and in the United States, the United Nations said.

Five years of recurring droughts have destroyed maize and bean harvests, leaving poor subsistence farmers in the so-called Dry Corridor that runs through Guatemala, El Salvador, Honduras and Nicaragua struggling to feed their families.  8% of families in the Dry Corridor, mostly small-scale farmers, said they plan to migrate because they lack food.


"People first start to lose their income source, they then start to sell their assets, then they start to look for other possibilities," said Rossella Bottone, the WFP's monitoring and evaluation officer for Latin America and the Caribbean. "One of the coping strategies is first internal migration - so they go to the cities to find income. But when these coping strategies are exhausted, they migrate externally," Bottone told the Thomson Reuters Foundation. While many leaving the Dry Corridor are men, more women have been migrating with their children north to the United States over the past year, Bottone said.
WFP research in 2017 found a clear link between food shortages and emigration in Honduras, El Salvador and Guatemala, where destitute families are also driven to migrate because of extreme poverty and gang violence.
"Climate change and its consequences have resulted in more and more people now seeing emigration as the only way out," said Thomas Wriessnig, Germany's ambassador in Honduras.
Some 1.4 million people living in the Dry Corridor need food aid, according to the WFP, which aims to help 700,000 people this year in El Salvador, Guatemala, Honduras and Nicaragua. So far 160,000 people have received support.