The Military and Global Warming

From the 2001 launch of the so-called War on Terror to 2017, the Pentagon generated at least 1.2 billion metric tons of greenhouse gases—with annual rates exceeding the planet-warming emissions of industrialized countries such as Portugal or Sweden—according to new research from Boston University professor Neta C. Crawford in a paper (pdf) by the Costs of War Project at Brown University's Watson Institute for International and Public Affairs.

"Absent any change in U.S. military fuel use policy, the fuel consumption of the U.S. military will necessarily continue to generate high levels of greenhouse gases," the paper warns. "These greenhouse gases, combined with other U.S. emissions, will help guarantee the nightmare scenarios that the military predicts and that many climate scientists say are possible."

U.S. military emissions—which largely come from fueling weapons and equipment as well as operating more than 560,000 buildings around the world—from 1975 to 2017, relying on data from the Energy Department because the Pentagon does not report its fuel consumption numbers to Congress.


The paper's opening summary outlines four major benefits of further decreasing DOD's fossil fuel use:
First, the U.S. would reduce greenhouse gas emissions. This would thereby mitigate climate change and its associated threats to national security
Second, reducing fossil fuel consumption would have important political and security benefits, including reducing the dependence of troops in the field on oil, which the military acknowledges makes them vulnerable to enemy attacks. If the U.S. military were to significantly decrease its dependence on oil, the U.S. could reduce the political and fuel resources it uses to defend access to oil, particularly in the Persian Gulf, where it concentrates these efforts.
Third, by decreasing U.S. dependence on oil-rich states the U.S. could then reevaluate the size of the U.S. military presence in the Persian Gulf and reevaluate its relationship with Saudi Arabia and other allies in the region.
Finally, by spending less money on fuel and operations to provide secure access to petroleum, the U.S. could decrease its military spending and reorient the economy to more economically productive activities.


Stacy Bannerman, in an op-ed for Common Dreams last year, warned that "if we don't get serious about stopping the United States War Machine, we could lose the biggest battle of our lives."


"In order to achieve the massive systemic and cultural transformations required for mitigating climate change and advancing climate justice," Bannerman wrote, "we're going to have to deal with the socially sanctioned, institutionalized violence perpetrated by U.S. foreign policy that is pouring fuel on the fire of global warming." 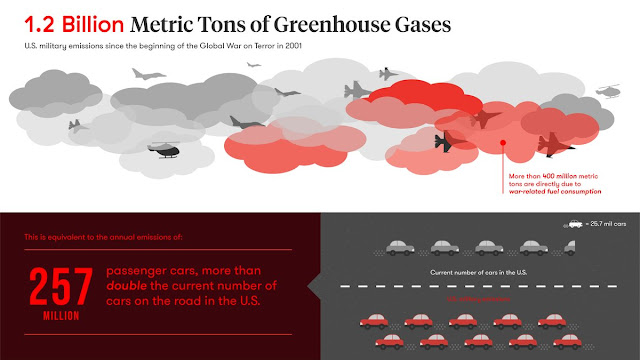 Posted by ajohnstone at 1:05 am