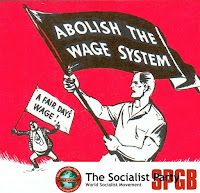 
The Socialist Party is an independent political organisation that has neither allegiance to, nor sympathy with, any other political party or group in this country. Our aim as socialism—a wage-free, moneyless, class-free society based upon production for use in which each member of society would contribute to the wealth of society in accordance with mental or physical abilities and take from the wealth of society in accordance with needs.

If you think about it for a moment, you will agree that if it were possible to build such a social system, the many problems that we face today under capitalism—problems like poverty, insecurity, homelessness, crime and war that arise inevitably out of the capitalist scheme of production for profit would no longer exist. Socialism offers us an escape from the evils that afflict our society today the feasibility of the proposition merits sympathetic consideration.

No doubt the “human nature” argument has already occurred to you: “Human nature, being what it is, people could not live co-operatively in a society where coercion ceased...the greedy would take it all...the lazy would never work...” Most of us who are now in the Socialist Party used the same argument ourselves when first encountered socialists, before realising that what we termed “human nature” was, in fact, human behaviour, something dependent upon situations and circumstances, the social and economic environment, not something unchangeable and unalterable.

Capitalism today has developed the resources of society to a point where abundance is possible and can provide plenty for everybody. We have the technological potential of robots and automation. What is necessary required is now only that a majority arm themselves with the knowledge of what socialism involves and entails, and use the power of the vote to consciously initiate social change. Socialism, by its very nature, requires the conscious participation of the majority from the outset. It cannot be delivered to you by saviours.

Fellow-workers, the building up of a strong Socialist Party is indispensable for the establishment of the cooperative commonwealth, an industrial democracy. We appeal to all our fellow-workers who believe that the emancipation of the working-class can only be obtained by the combined action of the members of that class and consciously recognise that the class-struggle can alone be the basis of such a party; that we must disavow ourselves from all non-socialist parties and politicians, to throw in your lot with us and help us in building up a strong and healthy fighting party, organised along definite class lines for the emancipation of the working class from wage-slavery and from the capitalist society of which they are the victims. Conscious of the correctness and the soundness of our Declaration of Principles, we ask you to help us carry them into action and to refuse longer to place leaders or vanguards above your principles.