Capitalism: Enemy of the Planet

Around 20,000 protesters from 15 countries rallied in the western German city of Aachen on Friday as part of a student movement demanding action to combat climate change. The protest is close to one of Germany's largest lignite mines. Thousands of climate activists are preparing to block access to the vast open coal mine over the weekend.

Many of the "Fridays for Future,"demonstrators carried signs and banners with slogans like "your greed costs us our future," ''climate justice: that's what we want," and "If Earth was a bank, you would have rescued it long ago."

Activists accuse Germany of not doing enough to battle climate change, demanding that Berlin start winding down coal consumption and implementing progressive policies to become CO2 neutral in the near future. They have called for all German coal-fired power plants to be shut down by 2030,Europe's most populous country will likely miss its climate goals because of a reliance on cheap coal from mines near Hambach. A coal commission set up by the federal government to work out Germany's plans to phase out coal power released its findings. It recommended that Germany should continue coal mining until 2038, at the latest —far too late for the country to meet the targets of the 2015 Paris climate accord.
In recent years, activists have fought to preserve Hambach Forest in the western state of North Rhine-Westphalia, building treehouses to prevent the old-growth forest from being felled to make way for the mining of lignite, or brown coal.
https://www.dw.com/en/germany-aachen-hosts-fridays-for-future-climate-rally/a-49291173
“When a great social revolution shall have mastered the results of the bourgeois epoch, the market of the world and the modern powers of production, and subjected them to the common control of the most advanced peoples, then only will human progress cease to resemble that hideous, pagan idol, who would not drink the nectar but from the skulls of the slain.” - Marx, The First Indian War of Independence 1857-1859

It appears that capitalism cannot halt its march towards destruction. The system of capitalism and its basic laws guarantee the abuse of nature. Capitalist production and the market cannot and will not stem the rush to climate catastrophe. Environmentalists sometimes appear to possess the simple perspective that all is required is convincing people to change lifestyles and consuption patterns to slow down climate change. The reality, however, is that the economic social system we live under leads to the destruction of the environment.

If we expect to make a difference, then we must also change the system. If the ecology movement is to be successful, then it must go beyond the focus of an individual's daily habits, and identify the institutions of society responsible for the environmental crisis. The desirable alternative society to aspire towards is the one controlled from the bottom up, without profit-oriented production that necessitates exploitation of nature and people. In other words, socialism that produces what people need. For the first time since the Industrial Revolution, socialism will permit genuine possibilities for ecological sustainability. Without profit-seeking corporations or bureaucracies ruling in their own self-interest we could ensure a sound steady-state society.

The ecology movement has definitely called into question many aspects of modern society that are complicit in the environmental crisis but without a coherent vision of a better world and the organisation that goes with it, even mass protests of ordinary working people in response to injustice will likely go nowhere.

Socialist politics is indispensable to any real struggle against the environmental crisis. There is a need for a democratic, qualitative transformation of society. Our goal in the Socialist Party is to show why the struggle for socialism is the sole solution to avoid climate catastrophe. It requires replacing capitalist profit with production for real human need, and a substantial transformation of how we live and work, in ways that only a fundamentally democratic and fully participatory society can hope to achieve. There really isn’t time to waste. 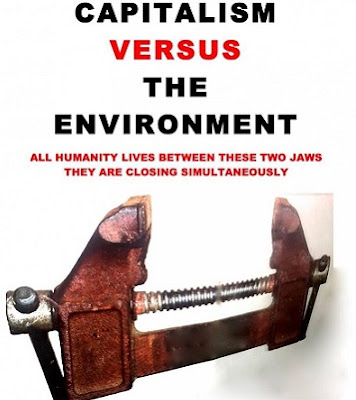 Posted by ajohnstone at 5:20 pm