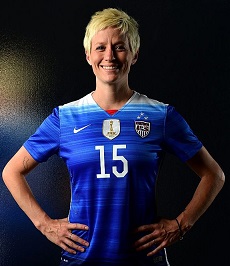 Megan Rapinoe, co-captain of the US women’s football team said she would not go to the White House if her team won the Women’s World Cup. She described Trump as “sexist,” “misogynistic,” “small-minded,” “racist” and “not a good person.” In September 2016, she became one of the first white sports figures to ‘take a knee’ during the national anthem in support of American football player Colin Kaepernick’s protest against police violence involving racism. She is a very vocal advocate for women’s rights, LGBT rights, refugee rights, and racial justice.

Rapinoe is a sports figure unafraid to fight for her beliefs or accept the consequences of her actions. After Rapinoe knelt, she was instantly dropped from the American national team for six months. She returned to the squad when rules were introduced that forced players to stand during the national anthem. She agreed to the terms but said she would never sing the anthem, not does she clasp her hand over her heart as others do.
Posted by ajohnstone at 1:32 am