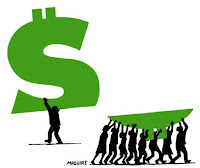 The bottom half of Americans combined have a negative net worth," Ben Steverman wrote in a recent Bloomberg article.
This statement is based on the research of economists Emmanuel Saez and Gabriel Zucman, who study wealth inequality. Zucman is a "wealth detective" who spends hours combing through spreadsheets of tax tables, macroeconomic datasets, and international money flow calculations to find the secret money stashes of the world's richest people.
Saez and Zucman's research on wealth inequality also found that 20% of American wealth is controlled by the top 0.1% of taxpayers - or about 170,000 families. The top 1% control about 39% of the country's wealth, and the bottom 90% hold only 26%, despite years of economic growth in the US overall.
"The pie has not become bigger" in the US, Zucman told Bloomberg. "It's just that a bigger slice is going to the top."
French economist Thomas Piketty, one of Zucman's former professors, has been spotlighting findings from the 2018 World Inequality Report, which he coauthored.
The authors found that while the income of the top 1% of American taxpayers made up 11% of the national income in 1980, it now makes up more than 20% of the country's income.
And the income of the bottom half of Americans, which was 20% of the national income in 1980, has fallen to just 12%.
In other words, the country's rich have been getting increasingly richer while the middle class and the poor get poorer.
Millennials are saddled with more than $1 trillion of student loan debt. ore than 3 million Americans aged 60 and older are still paying off their student loans.

Credit card debt is also on the rise. More than 40% of US households carry credit card debt, and the average debt balance is $5,700, according to a 2018 report.

And about one fifth of Americans don't have any money saved up.
Posted by ajohnstone at 6:09 am