Human Rights Watch (HRW) has accused the UK government of breaching its international duty to keep people from hunger by pursuing “cruel and harmful polices” with no regard for the impact on children living in poverty. The NGO said that the government was breaching its obligations under human rights law to ensure people have enough food.

In its damning 115-page report examining family poverty in Hull, Cambridgeshire and Oxford, it concluded that tens of thousands of families do not have enough to eat. HRW said that ministers had “largely ignored growing evidence of a stark deterioration in the standard of living for the country’s poorest residents, including skyrocketing food bank use, and multiple reports from school officials that many more children are arriving at school hungry and unable to concentrate”.

It revealed that schools in Oxford are the latest to have turned to food banks to feed their pupils. Volunteers and staff at schools in Oxford confirmed that they were now reliant on donations, saying that teachers were noticing pupils who were missing meals at home and needed to be fed. Pupils at Orchard Meadow and Pegasus primaries schools in the Blackbird Leys area of Oxford are among those receiving leftover fruit, vegetables, bread and dried goods from supermarkets and wholesalers delivered by the Oxford Food Bank.

Chris Hearn, a retired firefighter and volunteer driver for the charity, said: “I think it is a shameful thing the state schools have to rely on charity to give their students plentiful and nutritious meals. It’s outrageous.”


“We have teachers coming up to us in the middle of the day and they say there is a child who hasn’t had breakfast, who hasn’t eaten since the previous evening,”
At Pegasus primary school, Rachel Wilding, whose job involves contacting pupils’ families, said the deliveries are used to feed children at breakfast and to try and teach parents how to cook better. Some is bagged up and offered to needy families to take home. 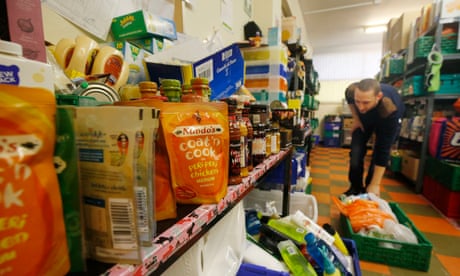 Read more
“We expect the children to go into the classroom and learn, but if you don’t have enough food in your stomach it is not not going to be a priority,” she said.
At the Peeple Centre, which helps families with children under five who are often referred by social services. Its workers bag up the food and take it to sessions with their users.


“People are hungry,” said Helen Stroudley, project manager. She cited high prices and the difficulty of keeping food if families are squeezed into temporary accommodation and lack fridge space. Even working parents – including a mother and father who both work as nurses – need the food parcels they offer, she said.
Sandwell Valley School in the West Midlands is using a food bank to deliver fresh produce to reduce the price of meals to pupils who might not otherwise afford them. A primary school in Great Yarmouth has set up its own food bank for hungry children.


Philip Alston, the United Nations rapporteur on extreme poverty, who has already highlighted the same issues in his interim findings,  said: “You are really screwing yourselves royally for the future by producing a substandard workforce and children that are malnourished.”
Kartik Raj, the author of the HRW report, said growing hunger was “a troubling development in the world’s fifth largest economy”. He said: “Standing aside and relying on charities to pick up the pieces of its cruel and harmful policies is unacceptable. The UK government needs to take urgent and concerted action to ensure that its poorest residents aren’t forced to go hungry.”
https://www.theguardian.com/society/2019/may/19/uk-government-cruel-policies-child-hunger-breach-human-rights-says-ngo
Posted by ajohnstone at 12:30 am