"Made it ma, Top of the world"

"...These matters were not unrelated to the fact that marketing the opportunity for people to climb Everest emerged as another investment, essentially no different from all the other degrading examples of the commodity demands of capitalism..."
https://www.worldsocialism.org/spgb/socialist-standard/2013/2010s/no-1306-june-2013/mount-everest-top-whose-world/

"...Mount Everest, once regarded on one side as holy ground side and on the other as a supreme test of moral fortitude, has deteriorated into just another sideshow in capitalism’s commodity culture..."
https://www.worldsocialism.org/spgb/socialist-standard/2013/2010s/no-1307-july-2013/postcard-peaks/

A British man died on Saturday on Mount Everest - bringing to 10 the total death toll this season on the world's largest peak.  The number has already eclipsed the total for 2018 as the summit became overcrowded with queuing climbers. The British man reportedly fell ill while descending from the summit. Another, from Ireland, died on Friday. 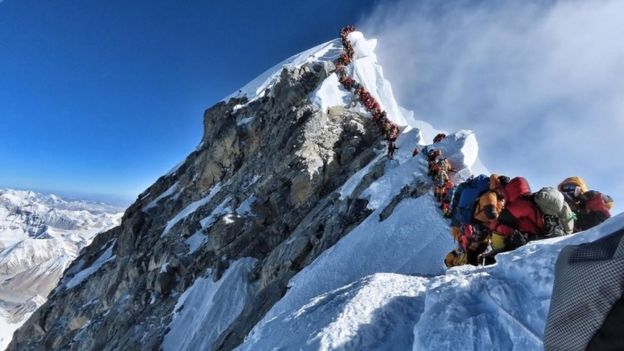