EU Election Result - What it means 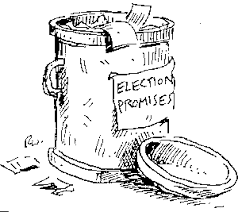 The past couple of months, the Socialist Party has devoted a lot of its energy and resources to the European elections. The Socialist Party contested the South East England region in the Euro-elections which resulted in 3,505 votes. The most important feature was the circulation of the largest free distribution of literature we have yet undertaken. It was a tribute to the strength and determination of the tiny band of members and their hard work and experience will stand us in good stead in the struggles that lie ahead. Our campaign was the beginning of the real electoral fight for the emancipation of the working class.

These EU elections could be regarded as a proxy referendum between the Brexiteers and Remainers, both who made large gains from the Tories and Labour. In many ways this political polarisation was echoed across the rest of Europe where right-wing Euro-sceptic nationalists and the opposing Green bloc made gains.

Elections are important because the party—and the class—that wins them thereby controls political power. It is a sad fact that ever since workers have had the vote the vast majority of them have chosen to support capitalist political parties and so helped to keep in being the system which exploits them and deprives them of liberty, abundance and security. At the moment the majority are expressing their preference for capitalism. They vote for representatives of capitalism to run society in the interests of the capitalist class, to protect the property rights of capitalism, to administer the state machine with its basis in the privileges and exploitation which are part of property society. What is a cast iron certainty is the working class face many years of the most severe punishment for the unbridled sins of capitalism.

At the moment, in many capitalist countries, the workers have one of the essential tools for liberation—they have the vote. The capitalists fully recognise the importance of elections; that is why they at first opposed universal suffrage and why they now spend vast sums of money in hoodwinking the voters. The other essential tool — socialist understanding — is at present lacking. And the way to stimulate it is not by spreading confusion, nor by opportunism, nor by provoking ignorance. There is only one way—the establishment and propagation of the case for the alternative society of socialism.

When the Socialist Party contest elections our candidates do not make any promises. We do not try to convince voters that our party will do anything for them. What our candidates present is the case for a new social system. We are seeking to spread knowledge and understanding of socialism and to give as many people as possible the opportunity of voting for a world of abundance, peace and freedom. Elections provide an opportunity for the Socialist Party to make the case against capitalism and for socialism. Workers are faced with a choice: more capitalism or social revolution.

We call upon those workers who cast a vote for socialism in these EU elections to now join the party and help build the number of workers who will say YES to revolution at the next election.