CEOs rich as ever

CEOs of some of the wealthiest companies in the U.S. are seeing their pay rise at about twice the rate of the workers who make the day-to-day operations of their businesses run. Workers would need to work 158 consecutive years to earn what their bosses make in one year.


A study of compensation for 340 executives at S&P 500 companies which revealed that the CEOs earned raises averaging $800,000 in 2018—a seven percent increase over the previous year.  The median increase for workers was just 3%.

CEOs at companies including Tesla, Oracle, and T-Mobile saw their pay increase by an average of $1.1 million in 2018, bringing their median compansation to $18.6 million.

American workers were given a raise of just 84 cents on average, reported the NY Times. Reporter Peter Eavis wrote many companies are paying their leaders millions above their base salary just "to do the basics" of their jobs. 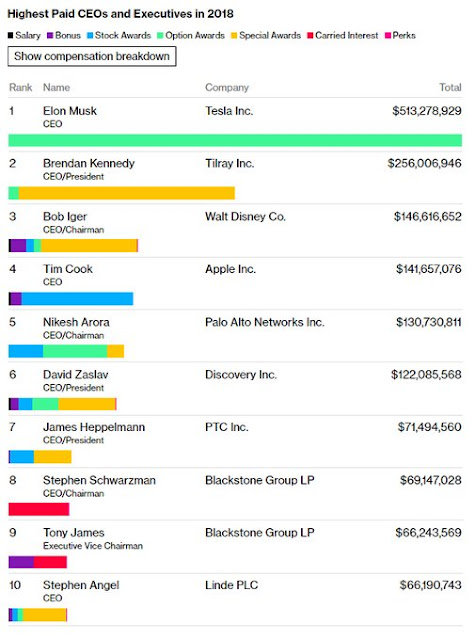 Posted by ajohnstone at 4:07 am