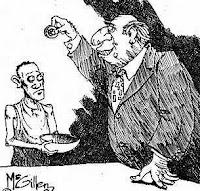 The UK's social safety net has been "deliberately removed and replaced with a harsh and uncaring ethos", a report commissioned by the UN has said. Special rapporteur on extreme poverty Philip Alston said "ideological" cuts to public services since 2010 have led to "tragic consequences". The Australian professor, who is based at New York University, said government policies had led to the "systematic immiseration" of a significant part of the UK population, meaning they had continually put people further into poverty.


Some observers might conclude that the DWP had been tasked with "designing a digital and sanitised version of the 19th Century workhouse, made infamous by Charles Dickens", he said. Prof Alston said he had heard accounts of people choosing between heating their homes or eating, children turning up to school with empty stomachs, increased homelessness and food bank use, and "story after story" of people who had considered or attempted suicide. He said he had met people who had sold sex for money and joined gangs to avoid destitution.
The report cites independent experts saying that 14 million people in the UK - a fifth of the population - live in poverty, according to a new measure that takes into account costs such as housing and childcare. In 2017, 1.5 million people experienced destitution, meaning they had less than £10 a day after housing costs, or they had to go without at least two essentials such as shelter, food, heat, light, clothing or toiletries during a one-month period.
He warned that unless austerity is ended, the UK’s poorest people face lives that are “solitary, poor, nasty, brutish, and short”. He said leaving the EU was “a tragic distraction from the social and economic policies shaping a Britain that it’s hard to believe any political parties really want”.
He has accused government ministers of refusing to debate the issues he raised and instead deploying “window dressing to minimise political fallout” by insisting the country is enjoying record lows in absolute poverty, children in workless households and low unemployment. The “endlessly repeated” mantra about rising employment overlooks that “close to 40% of children are predicted to be living in poverty two years from now, 16% of people over 65 live in relative poverty and millions of those who are in work are dependent upon various forms of charity to cope”, he said.
Alston explained "British compassion has been replaced by a punitive, mean-spirited and often callous approach apparently designed to impose a rigid order on the lives of those least capable of coping.”


The report slams the government’s austerity programme, with criticisms of “shocking” rises in the use of food banks and rough sleeping, falling life expectancy for some, the “decimation” of legal aid, the denial of benefits to the severely disabled, falling teachers’ salaries in real terms and the impoverishment of single mothers and people with mental illness. Alston said austerity had “deliberately gutted” local authorities, shrinking library, youth, police and park services to the extent that it was not surprising there were “unheard-of levels of loneliness and isolation”
https://www.theguardian.com/politics/2019/may/22/un-report-compares-tory-welfare-reforms-to-creation-of-workhouses

Posted by ajohnstone at 7:26 am