Brexit or Remain? Who Cares? Only Business. 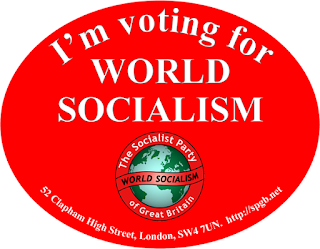 The EU election is tomorrow, Thursday the 23rd of May. As always, if there is not Socialist Party candidate standing in your area, we advise spoiling your ballot paper by writing "World Socialism". If there is someone from the Socialist Party on the ballot paper, we counsel that you vote for him or her only if you accept our case for socialism.

Due to what is now considered a freak referendum result, the Tory Party's Britain PLC and the Labour Party's UK Ltd are committed to some sort of withdrawal from the EU. The British capitalist class's political representatives took the risk of submitting the matter for a decision by the working class, who didn't necessarily follow the interest of the capitalist class. The CBI and Big Business were intent and determined to keep Britain in the EU. The City of London, banking, insurance and transportation interests, which have a decisive say in British foreign policy, hoped that staying in the EU would maintain the primacy of their interests. But it all back-fired. The Brexit proponents argued that Britain could have its cake and eat it outside the EU. They claim that British companies could participate in the EU, exporting to Europe and continue to attract inward investment while at the same time, enjoying the benefits of their involvement in the rest of the world economy, trading with and investing in North America and the Far East. A powerful group of capitalists who back Brexit were those who represent off-shore interests – firms which though based in Britain operate on a global rather than a European basis. This hard anti-European wing of British capital is undoubtedly a minority of the ruling class, but a right-wing anti-immigration media power greatly amplifies its voice.

In all probability the capitalist class will be able to cope. Britain will stay a member of the Single Market but not have the same say as now in its rules and regulations. Brexit is bound to mean access to the single market on less favourable terms than before, and British capitalism on its own will have less bargaining power over trading arrangements than as part of a larger bloc. But that's their problem. As far as most people are concerned, the only markets they are involved in are the labour market on which they sell their working skills and the supermarket where they buy their weekly necessaries. Whether Britain is in or out of the EU this will continue to be the situation. In either case, capitalism will continue to exist and so, therefore, will the problems it causes and which politicians are always promising to solve but can't – because the very nature of the capitalist system requires profits to come people across the board in all fields.

The Socialist Party can see that if there is no solution inside the EU, there is less of a solution outside it. There must be placed the class internationalism and cross-border solidarity of the working class. The problems facing the working class can only be solved by socialism. There is no magical way in which this issue can be avoided. Workers everywhere must engage in struggle against the common enemy—capital, by expropriating the ruling class. We call upon our fellow workers in different countries to stand shoulder to shoulder against the phony internationalism of supporting one’s own ruling class in any temporary arrangements they make with the ruling class of other countries. This was why the Socialist Party doesn't take sides and considers the present Brexit debate as an irrelevant sideshow. We regard it as a false choice, between capitalism inside the EU and capitalism outside the EU and we are opposed to capitalism in all its forms. What we want to exit is capitalism.

Socialist Party candidates in South East England in the forthcoming Euro-elections will be. 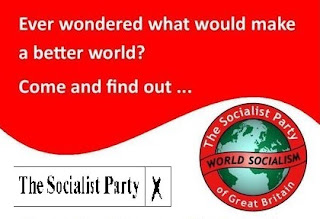