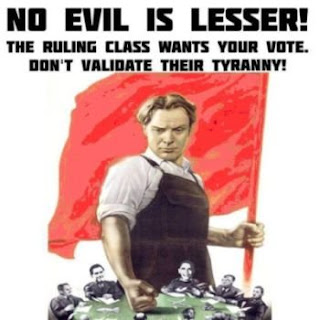 It has been a common refrain among the progressives for as long as we remember that “We have to keep Democratic Party in because the Republicans are worse.” Is the Democrats really the ‘lesser evil’? Or is it just a smokescreen to conceal that, yet again, this election will present us with no alternative. Of course, there are differences between a Republican and a Democrat administration but are those differences sufficient to justify support for one over the others. If you are interested in furthering progressive politics and advancing the cause of serious social change, there is nothing to be gained. The exhausted ‘lesser evil’ argument can only do more damage to the prospects for creating a new politics of radical change in the circumstances of today. In the case of the Democratic Party it has become increasingly more difficult for its supporters to justify their continued loyalty for a party that has abandoned its own labor union traditions. Reformism preaches defeatism to the exploited. Nothing can be expected, nothing is possible but what exists, and what continues is betrayal of what could be with the argument of lesser evil. Those who call for a “lesser evil” — that is, for evil — will unfortunately succeed. The call for a “lesser evil” is what makes possible the greater evil.

The liberal progressive vote will always gravitate to the slightly less nasty party of capital, the lesser of two evils argument. No change is really possible because we can defer the choice to demand real change indefinitely. In fact, what actually happens is the political centre of gravity gradually shifts ever more to the right. It is dangerous to send any party the message that you have our vote no matter what. Some say: “People must take into account the real world. Small differences between the major candidates matter greatly to the outcomes for the most vulnerable people at home and abroad. Indifference towards that is callous.” The small differences between the major parties are of zero interest to the public at large. People who are fed up with inequality, war, and environmental destruction should not hold their noses and vote Democrats in, not even in the marginal “swing states” where some leftists advocate doing that. Voters should be encouraged to support the candidate whose platform they agree with the most. Isn’t that what people are supposed to do in a democracy? Some on the left say “vote for the Democrats but then fight like hell against them”, but it takes time  for anything resembling a “fight the like hell” sentiment to materialise, for it to sink in that the “lesser evil” really is nevertheless still evil, not simply “flawed”, “imperfect” or “compromised”. If progressives are going to be "pragmatic" If you are recommending people to vote Democrat, you doing so in the certain knowledge that a Democrat government is going to disappoint and that as result of that disappointment workers in the long run are almost certainly going to switch their allegiance back to the right. Given the see saw nature of capitalist politics this is what invariably happens, does it not? Why not then just short circuit the whole lengthy exposition and simply say “Vote Republican!!” Because, let’s face it, that is the long term consequence of voting Democrat. You are simply preparing the ground for the return of a future Republican president in the wake of lesser evil’s inevitable failure. Even if, for the sake of argument, a Democrat President was less harsh in its anti-working class policies in the short term, it is still in effect a vote for the for the right-wing, the “greater evil”, in the long term, given the see-saw nature of capitalist politics. Invariably the election of one capitalist party to power leads to disenchantment and the subsequent diversion of political support to some political rival, only for the whole process to repeat itself again and again. The political rival gets into power and disappoints its followers who then switch their allegiance back to other one. It is a treadmill we are talking about here and the only way to deal with a treadmill is to get the hell off it. At some point you just have to draw a line in the sand and say "enough is enough". Otherwise you are liable to find yourself sucked into a quagmire with no way out with no end in sight.

People now face a daunting array of challenges. If we are to save ourselves, we must take an honest look at where we are and then act urgently to get where we want to go. The interests of the exploited and oppressed are the same in all countries. For many years people have been told to vote for a lesser evil. Lesser Evils who, as executors of the system, find themselves acting at every important juncture exactly like the Greater Evils, and sometimes worse. The lesser evil in theory becomes the greater evil in practice. It would be nonsense to argue that a Trump administration would be “better than a Biden one It is equally nonsense to argue that a Biden administration is better than Trump. Both are anti-working-class. The tragedy lies in the fact that there is no mass revolutionary party, independent of all varieties of reformist politics, to end capitalist rule and its attendant horrors. This lesser-evil argument represents the greatest single mistaken dogma on the liberals. In politics, we don’t believe in choosing the “lesser evil” over a greater evil, when such a choice exists. But these parties are both monstrous evils for the working people. Choose instead something good for working men and women.

Posted by ajohnstone at 3:43 am