All belongs to all

Organisers said over 1.8 million people took part in over 2,000 actions in 125 countries with chants including "Save our planet, save our future." In London, thousands gathered in the sunshine in Parliament Square chanting, “Where the fuck is the government”, and “This is what democracy looks like”, before staging a sit-down protest outside the department of education. In Cambridge about 2,000 school students demonstrated and there were big protests in cities from Leeds to Bristol, Manchester to Cardiff.

Socialism means many things to many people. Ask someone in the environmentalist movement what socialism means and you'll be answered with various responses - it is government control, state ownership, regulations and legislation, economic intervention by government, redistribution of income, progressive taxation. It’s the welfare state, the mixed economy, or the command economy and central planning. When someone does proclaim that he or she is an “eco-socialist”, they have difficulty defining what that actually means other than they are for a green sustainable economy based on renewable energy with good jobs and full employment for everyone.

The problem with such “socialisms” is that they all leave capitalism in place. By understanding capitalism and how it works, we come to a clearer understanding of what socialism should mean.

If socialist politics means a radical break from capitalism, then all the premises of capitalism must be fundamentally challenged. Whether it is called ‘the market economy, ‘neo-liberalism’, ‘free enterprise’ (or even ‘mixed’ or ‘state-command’ economy”), the social system under which we live is capitalism. Capitalism is primarily an economic system of competitive capital accumulation out of the surplus value produced by wage labour. As a system it must continually accumulate or go into crisis. Consequently, human needs and the needs of our natural environment take second place to this imperative. The result is waste, pollution, environmental degradation and unmet needs on a global scale. The ecologist’s dream of a sustainable ‘zero growth’ within capitalism will always remain just that, a dream. If human society is to be able to organise its production in an ecologically acceptable way, then it must abolish the capitalist economic mechanism of capital accumulation and gear production instead to the direct satisfaction of needs.

Capitalism is a system of capital creation and accumulation. Capital must not only be created, it must be necessarily accumulated and expanded (and unless accumulated to a great extent the system breaks down resulting in recession and economic crises). The existence of capital presupposes two things - first, a working class which is divorced from does not own the means of production. The only thing that workers really possess is their labour power, their ability to labour which they must sell for a wage or salary. Secondly, the existence of a class which owns or controls capital, which buys the labour power of the workers and uses it for the creation of surplus value, profit. Thus, capitalism is a class-divided society. On the one hand, those who own only their labour power, on the other hand, those who own capital. On the one hand, those who survive by selling their labour power, on the other hand, those who gain their existence by living off the profit (surplus value) created by the other class. The distinguishing feature of capitalism is not that capital/property is privately owned or that production is anarchic, that there is no planning. It is that labour is alienated, exploited.  If the State intervenes or nationalises property and eliminates private capitalists the State itself becomes the single capitalist, its bureaucracy the de facto owners of capital. Capitalism as the ‘system of capital’ remains unchanged. It simply transforms into state-capitalism. The actual existence of capitalism as a ‘system of capital’ imposes limits to what that system can do. In the end, the system cannot work in a way that is detrimental to capital and all action within this system of capital (reforms, taxation, public works, health care, issues of the environment and ecology, etc.) are determined and restricted by the inevitable fact that capital must accumulate. Capital not only limits what one can do it also divides people against each other in an acknowledged ‘Rat Race’ that lays the foundation for the politics of despair, racism, sexism, ethnic division as people compete for the crumbs offered.

People think economics has something to do with bosses, accountants, economists, money, the market, profits, production, the division of labour, work or wage labour. Capitalists claim that all the things listed above like money and the market are natural, and it is impossible to have anything else. Instead, we need to talk of the economic means for the satisfaction of the needs of all human beings with the least possible expenditure of energy and resources to achieve them. To satisfy these needs, we need to re-organise society. We need to have a revolution to abolish all classes and wage-labour.

The Socialist Party rejects the market, money, and profit as both exploitative and unnecessary. Instead, we need a society of common ownership and voluntary labour to meet these shared needs and wants. The first is the taking into possession of all of the wealth of the world, on behalf of the whole of humanity, because that wealth is the collective work of humanity. This requires the abolition of all property and the holding of all resources in common for the well-being of all. The abolition of property requires the abolition of the wage system. The second is organising society around the principle “From each according to their ability, to each according to their needs.” This means everything should be produced, distributed and exchanged for free according to need. Everyone would be the judge of their own needs and take for free from the common storehouse whatever they needed. If there was scarcity, things would be rationed according to need.
The problem for a great number of people in the environmental movement is that they want to retain the market system in which goods are distributed through sales at a profit and people’s access to goods depends upon their incomes. The market, however, can only function with a constant pressure to renew its capacity for sales; and if it fails to do this production breaks down, people are out of employment and suffer a reduced income. It is a fundamental flaw and an insoluble contradiction in the green capitalist argument that they want to retain the market system, which can only be sustained by continuous sales and continuous incomes, and at the same time they want a conservation society with reduced productive activity. These aims are totally incompatible with each other. Also what many green thinkers advocate in their version of a “steady-state” market economy, is that the surplus would be used not to reinvest in expanding production, nor in maintaining a privileged class in luxury but in improving public services while maintaining a sustainable balance with the natural environment. It’s the old reformist dream of a tamed capitalism, minus the controlled expansion of the means of production an earlier generation of reformists used to envisage. 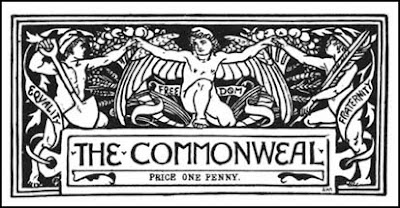 Posted by ajohnstone at 8:24 pm