The Acts of the God-Men 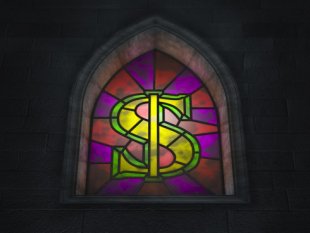 Television evangelist preacher Joel Osteen has been accused of closing his church's doors to victims of Hurricane Harvey. Lakewood Church is the largest megachurch in the United States, once home to the NBA's Houston Rockets and with an average weekly attendance of more than 40,000 people. The church had come in for heavy criticism on social media after it claimed that the church was flooded and could not be used as a refuge shelter for victims of the hurricane, which has displaced tens of thousands of people and killed at least seven. Photographs from outside the church showed that the building had not been flooded. CNN notes that there was a flood wall had been put in place at the church, years ago after a previous storm flooded the area.  Osteen’s father-in-law, Donald Iloff, told CNN. “We are prepared to shelter people once the cities and county shelters reach capacity. Lakewood will be a value to the community in the aftermath of this storm in helping our fellow citizens rebuild their lives.”

Let's now be clear - If you live just blocks away from the church and your home has been flooded, you cannot stay at the church. The church is not housing you until the shelters have reached capacity, so as long as there is space at a local shelter, even if getting to said shelter requires a boat, then you are out of luck. And about those tithes that you’ve been giving the church...i'm sure Osteen still thanks you for those donations.
Oh, and now after all the Twitter backlash, Olsteen has relented and tweeted his church doors are now been belatedly opened to the needy.

Residing in a $10.5 million Houston mansion, Osteen reportedly banks over $55 million a year through the sales of his numerous best-selling books and related journals and study guides, according to Celebrity Net Worth. The New York Times reported that his first book alone sold more than three million hardcover copies. Osteen uses his ministry, which reaches the homes of over 100 million people, as a vehicle for self-promotion and building his own fortune.


Osteen is not the only rich pastor in the U.S. Here are some of them along with their net worth.

1. Kenneth Copeland,
$760 million Copeland leads the network "Believer's Voice of Victory," which is a 24x7 program on healing and finding peace. The focus of the program is how a solid foundation can be built on faith. Kenneth Copeland Ministries that specializes in teaching principles of bible faith runs on a 1,500-acre campus in Texas, according to Beliefnet, a website that publishes content related to faith and spirituality.

2. Marion Gordon "Pat" Robertson, $100 million
Robertson is the son of former Sen. A. Willis Robertson (D-Virginia). Pat served as a Southern Baptist minister for many years before making a successful career as a media mogul and executive chairman. In the late 80s, he also ran for president but did not win. He runs several organizations such as the Christian Coalition, a Christian right organization that raises money and public support for conservative political candidates.

3. Toufik Benedictus "Benny" Hinn,
$42 millionHinn was born in Israel and was raised in the Eastern Orthodox tradition. He claims he received a vision in 1974 when he saw people falling into a roaring inferno and a warning that if he did not preach the Gospel, every soul falling into the inferno will be Hinn's responsibility. Days after he turned 22, he preached his first sermon and has been an evangelist since. The pastor has worked in the field for 40 years through miracle services, conferences, TV broadcasts, the Internet, audio-video recordings, among others.

4. Creflo Dollar, $27 Million
The founder of the non-denominational World Changers Church International, Georgia, Atlanta. Dollar was raised in a Baptist church and received a Bachelor of Science degree in education after which he held his first sermon in an elementary school cafeteria, 1986. Within 20 years, he was preaching to a congregation of 30,000 members and earning $69 million in revenue.


SOYMB has no doubt that those very charitable righteous men will be digging deep into their pockets to help out the victims of this Act of God.
Posted by ajohnstone at 6:30 pm