New Zealand and the TPP 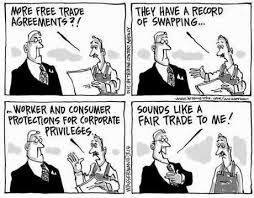 Today in New Zealand, protesters are taking to the streets in Auckland, Wellington, Christchurch, Hamilton and Dunedin to voice their concerns about the TPP trade deal. Trade ministers from the 12 nations are negotiating the Trans-Pacific Partnership (TPP) - which would stretch from Japan to Chile and cover 40 per cent of the world's economy.

Activists worry that a US-led free-trade deal under negotiation will prioritise corporate profits over workers' rights and pressure governments to bow to the will of investors. Campaigners for workers' rights complain that they have been denied a voice in the trade talks, and have raised concerns about part of the deal that would allow corporations to sue governments for the potential loss of future profits.

A protest group calling itself Show Us Ya Text occupied the Ministry of Foreign Affairs' Auckland headquarters to demand the full text of the Trans-Pacific Partnership (TPP) deal. Several members of the group went into the offices to demand the Government release the full TPP text.

It's Our Future – Christchurch spokesperson, Gen de Spaexplained, “there are thousands of families in poverty in New Zealand precisely because of economic instruments like the TPP which convey huge benefits to super-wealthy corporations and disadvantage the most vulnerable in our society. Protesters are not taking food from the mouths of the hungry, the current economic paradigm, which simultaneously wreaks havoc on the environment is the real cause.” It's Our Future – Christchurch, a self-organising grass roots group of dedicated individuals from all walks of life who have concerns around the 12 nation trade deal are organising events all week to coincide with the Nationwide Week of Action against the TPP.

Amid placards of protest, speakers from around Palmerston North and the wider regions expressed their opposition to the Trans-Pacific Partnership Agreement. While the protest was planned for The Square, bad weather on Saturday meant more than 100 people attended the protest at the Convention Centre instead, to listen to politicians, activists and former Oxfam executive director Barry Coates. He said the agreement was a real threat to the Government now and future governments. He discussed cases where countries were sued for loss of future profits under similar agreements.
"Germany was taken to the international tribunal when they wanted to phase out nuclear power."
It would also threaten the country's businesses, as it would open up government and local government contracts to international investors, he said.

"The investor-state dispute settlement provisions in this massive trade deal ... if it's passed, binds them to a convoluted logic that allows multinational corporations to sue ... if a government passes a law or regulation that protects its people to the possible detriment of sales," said Shawna Bader-Blau, executive director of the Solidarity Centre. "Corporate rights are treated as portable, binding and protected by enforceable laws in global trade agreements, but not so human rights," Bader-Blau said at the opening of a migrant labour conference on Monday hosted by Solidarity Centre in Bogor, 60 km south of the Indonesian capital, Jakarta. Speaking before more than 200 labour and migration experts from 45 countries, Bader-Blau said that while investor rights are protected, human rights are "relegated to unenforceable side agreements, aspirational multilateral protocols, spotty national laws and no accountability".

Activists say the investor-state dispute settlement (ISDS) has been used to pressure states not to raise the minimum wage or enact labour reforms.

"If we want to protect migrants, we have to tie that to the trade agreements", said Tefere Gebre, executive vice president of the American Federation of Labor and Congress of Industrial Organisations (AFL-CIO). "We think we can go back to the drawing table and draw up a better trade agreement".

Dr Romuald Rudzky, founder of the NZ School of Export, said the benefit would only be seen by multinational corporations. "Remember that over 50 of the world's 100 largest economies are corporations, not countries." He said New Zealand was about 364th, between French supermarket chain Carrefour and Japanese company Matsushita (Panasonic). "Let us be in no doubt that the TPP is a Trojan Horse... touted as a great prize, a gift, a no-brainer. It is in fact a vehicle for destroying the country from within."

The World Socialist Party (New Zealand) is well aware of the detrimental consequences of capitalist trade agreements without resorting to simplistic nationalistic protectionism. The TPP and European TTIP agreements are deemed to be important to kick starting new trade rounds, but also re-arranging the political architecture of the world to match the increasingly concentrated capital holdings that are bursting out of national boundaries. The socialist attitude is that, at the end of it all, the arguments among rival capitalists which have so far prevented agreement are a dispute between vying capitalist factions, free-trader versus protectionist, foreign versus native capitalist – competitors, fighting to defend or create conditions that offer them the best return. Even so, among the casualties are working people the world over, who will end up as collateral damage, more powerless and more vulnerable than ever in the face of global capitalism. As Marx once described such free trade treaties - 'freedom of Capital to crush the worker' (Speech on the Question of Free Trade 1848).

We end exploitation by ending capitalism.

Posted by ajohnstone at 3:01 am