We keep hearing that national income is higher than at the pre-crisis peak of the first quarter of 2008. However, in the meantime the population has grown by 3.5 million (from 60.5 million to 64 million), and in per capita terms UK income is still 3.4% less than it was six years ago. And this is even before we talk about the highly uneven nature of the recovery, in which real wages have fallen by 10% while people at the top have increased their shares of wealth. 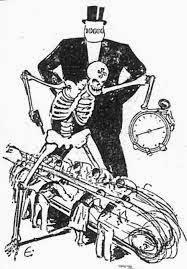 But can we not at least say that the recovery has been “jobs-rich”, creating 1.8m positions between 2011 and 2014? The trouble is that, apart from the fact that the current unemployment rate of 6% is nothing to be proud of, many of the newly created jobs are of very poor quality.

The ranks of workers in “time-related underemployment”, doing fewer hours than they wish due to a lack of availability of work – have swollen dramatically. Between 1999 and 2006, only about 1.9% of workers were in such a position; by 2012-13 the figure was 8%.

Then there is the extraordinary increase in self-employment. Its share of total employment, whose historical norm (1984-2007) was 12.6%, now stands at an unprecedented 15%. With no evidence of a sudden burst of entrepreneurial energy among Britons, we may conclude that many are in self-employment out of necessity or even desperation. Even though surveys show that most newly self-employed people say it is their preference, the fact that these workers have experienced a far greater collapse in earnings than employees – 20% against 6% between 2006-07 and 2011-12, according to the Resolution Foundation – suggests that they have few alternatives, not that they are budding entrepreneurs going places.

So, in between the additional people in underemployment (6.1% of employment) and the precarious newly self-employed (2.4%), 8.5% of British people in work (or 2.6 million people) are in jobs that do not fully utilise their abilities – call that semi-unemployment, if you will.

Posted by ajohnstone at 4:28 am