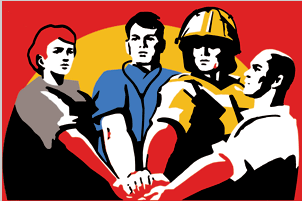 A call for union action by Alan Nasser makes a refreshing read.

“...Labor gets nothing unless it exhibits class consciousness, a trait long exhibited by its class enemy. And this involves acting in concert with fellow workers...That employers fear and resist unions suggests that employers have a greater appreciation than many of their employees that organization is for workers a powerful weapon in the class war....”

“...In a capitalist society in which business persons have, in addition to the power conferred by coalition, structurally determined power by virtue of their ownership of society’s productive and financial resources, labor is deeply disadvantaged and subordinated without its own form of organization. The union is such a form. It simultaneously constrains the power of capital and strengthens the power of workers....”

“...Still, a union’s conception of its objectives is almost always limited to its objectives. Each union seeks to enhance its own interests. It tends to act as a collective individual. In this sense, unions are not at present working-class agents. Were unions truly working-class organizations they would struggle to further not their individual interests but the common interests of the entire working class....”

“....The task ahead will not be easy. Discouragement makes it more difficult still. This essay has tried to show that a resurgence of militant labor unions is an essential ingredient of of popular anti-capitalist mobilization, and that discouragement has far fewer grounds than some of us had thought....”

Of course, the World Socialist Movement has its own reservation on everything the article says but it is nevertheless a worthwhile read.

One more effort to get to the abolition of the wage system on their banners.