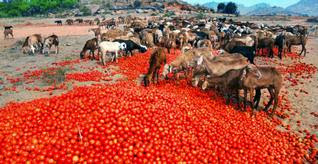 Not able to get the right price for tomatoes, farmers often resort to throwing away the produce -- The Hindu pic


On a visit to a food processing unit in Sonepat district in Haryana, I was shocked when I was told that tomato paste is being imported in large quantities from China. In fact, most of the big brands of tomato ketchup and tomato puree are using imported paste and pulp from China. This is happening at a time when farmers are repeatedly being forced to throw tomatoes onto the streets for want of buyers. This year too, when food inflation was at its peak, reports of dumping of tomatoes by farmers had poured in from several parts of the country, including Himachal Pradesh, Punjab, Haryana, Uttar Pradesh, Karnataka and Andhra Pradesh.

This was happening at a time when the tomato processing industry was merrily importing tomato paste and up mainly from China. While politicians, TV commentators, editorial writers stressed on the need to strengthen food processing, not many know that the existing tomato processing industry was relying heavily on cheaper import of pulp and paste. This is not the first year for such imports, a review of reports on Google showed that such imports are continuing over the years.

Not many know that the popular brands of tomato ketchup, tomato puree and even tomato juices that we consume at home are made from tomatoes imported from China, Nepal, Italy, USA and the Netherlands. In other words, we are inadvertently helping tomato farmers of the countries from where we import while our own farmers are left to die.

Just in one month, between Aug 28, 2014 and Sept 28, 2014, India imported US $ 376,009 worth of dried tomato and tomato products (like paste, pulp and juice concentrate) from China, followed by US $ 94,057 worth of imports from Nepal, and US $ 44,160 from the Netherlands. Some more research, and I find that in 2010 when traders were eyeing the market opportunities in Pakistan arising from devastating floods, the Indian processing industry was busy importing tomato paste from China. A news report in the Economic Times (Oct 20, 2010) quoted Pradeep Chordia, managing director Chordia Food Products Ltd saying: "We can't afford the high local prices so we imported 80 per cent of our requirement of tomato paste from China this year."

Go back a little more, and you find a lot of Indian companies importing tomato paste way back in 2005, and even before. No wonder, tomato farmers in India have been at a great disadvantage for several years now, if not decades.

Above is just one example of the waste, worldwide, connected to the system of production in capitalism. Wasted food, wasted labour, wasted fuel for transnational and transcontinental shipments - all in the pursuit of monetary profit, the be all and end all of capitalism's logic.
Crazy, illogical system!
If we look at the negative impacts of such transactions, in terms of unnecessary use of fossil fuels for instance and those ramifications, plus the impacts on people's lives and livelihoods, it is easy to see that by removing the financial aspect from the 'business' of food production and processing, etc., living in a socialist system will have many advantages for both people and planet.
JS