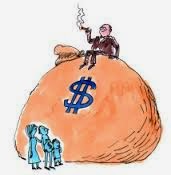 A report from Oxfam shows that the country's five richest families now own more wealth than the poorest 20% of the population. A handful of the super-rich, headed by the Duke of Westminster, have more money and financial assets than 12.6 million Britons put together. In a report, a Tale of Two Britains, Oxfam said the poorest 20% in the UK had wealth totalling £28.1bn – an average of £2,230 each. The latest rich list from Forbes magazine showed that the five top UK entries – the family of the Duke of Westminster, David and Simon Reuben, the Hinduja brothers, the Cadogan family, and Sports Direct retail boss Mike Ashley – between them had property, savings and other assets worth £28.2bn.

The most affluent family in Britain, headed by Major General Gerald Grosvenor, owns 77 hectares (190 acres) of prime real estate in Belgravia, London, and has been a beneficiary of the foreign money flooding in to the capital's soaring property market in recent years. Oxfam said Grosvenor and his family had more wealth (£7.9bn) than the poorest 10% of the UK population (£7.8bn).

Oxfam said that for the first time more working households were in poverty than non-working ones, and predicted that the number of children living below the poverty line could increase by 800,000 by 2020. It said cuts to social security and public services were meshing with falling real incomes and a rising cost of living to create a "deeply damaging situation" in which millions were struggling to get by.

Duke of Westminster (Wealth: £7.9bn)
Gerald Grosvenor and his family owe the bulk of their wealth to owning 77 hectares (190 acres) of Mayfair and Belgravia, adjacent to Buckingham Palace and prime London real estate.
As the value of land rockets in the capital so too does the personal wealth of Grosvenor, formally the sixth Duke of Westminster and one of seven god parents to the new royal baby, Prince George.
The family also own 39,000 hectares in Scotland and 13,000 hectares in Spain, while their privately owned Grosvenor Estate property group has $20bn (£12bn) worth of assets under management including the Liverpool One shopping mall, according to leading US business magazine Forbes.

Reuben brothers (£6.9bn)
Simon and David Reuben made their early money out of metals. Born in India but brought up in London, they started in local scrap metal but branched out into trading tin and aluminium.
Their biggest break was to move into Russia just after the break-up of the Soviet Union, buying up half the country's aluminium production facilities and befriending Oleg Deripaska, the oligarch associate of Nat Rothschild and Peter Mandelson.
The Reuben brothers are still involved in mining and metals but control a widely diversified business empire that includes property, 850 British pubs, and luxury yacht-maker Kristal Waters. They are also donors to the Conservative party.

Hinduja brothers (£6bn)
Srichand and Gopichand Hinduja co-chair the Hinduja Group, a multinational conglomerate with a presence in 37 countries and businesses ranging from trucks and lubricants to banking and healthcare.
They began their careers working in their father's textile and trading businesses in Mumbai and Tehran, Iran but soon branched out by buying truck maker, Ashok Leyland from British Leyland and Gulf Oil from Chevron in the 1980s, while establishing banks in Switzerland and India in the 1990s.
The family's London home is a mansion on Carlton House Terrace, overlooking St James Park and just along from Buckingham Palace, which is potentially worth £300m. They have links with the Labour party.

Cadogan family (£4bn)
The wealth of the Cadogans family is built on 90 acres36 hectares of property and land in Chelsea and Knightsbridge, west London.
Eton-educated Charles is the eighth Earl of Cadogan and ran the family business, Cadogan Estates, until 2012 when he handed it over to his son Edward, Viscount Chelsea.
Charles, who is a first cousin to the Aga Khan, started in the Coldstream Guards before going into the City.
He was briefly chairman of Chelsea Football Club in the early 1980s and his family motto is: "He who envies is the lesser man."

Mike Ashley (£3.3bn)
Ashley owns Newcastle United football club and became a billionaire through his Sports Direct discount clothing chain which he started after leaving school.
He was the sole owner of the fast growing business, which snapped up brands such as Dunlop, Slazenger, Karrimor and Lonsdale, until it floated on the stock market in 2007. He now owns 62%.
Ashley is a regular visitor to London's swankiest casinos but is famously publicity-averse.

The UK study follows an Oxfam report earlier this year which found that the wealth of 85 global billionaires is equivalent to that of half the world's population – or 3.5 billion people.

Posted by ajohnstone at 8:49 am